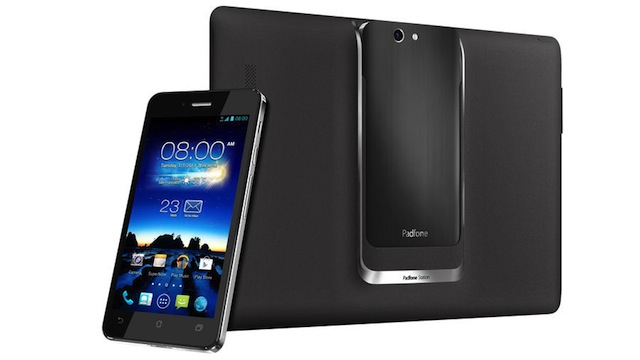 Following on from the confirmation of UK launch details for the Asus Padfone 2, Asus have revealed a new premium Padfone Infinity model at MWC 2013.

A seriously well-spec’d device, it’s comprised again of a smartphone and docking station that doubles up as a big-screen tablet when connected to the phone module.

Looking closely first at the phone, it’s a 5-inch device with a Retina-rivalling 441ppi Super IPS screen sitting within an aluminium unibody chassis. It’s being powered by a 1.7GHz quad-core Qualcomm Snapdragon processor with 2GB of RAM, as well as featuring NFC tech and 64GB of internal storage.

On the rear sits a 13MP camera with “lagless” shutter speed and a low-light image sensor.

Moving onto the docking station, it’s a 10.1-inch device that boasts a high resolution 1920×1200 display, a micro USB port and 1MP front-facing camera.