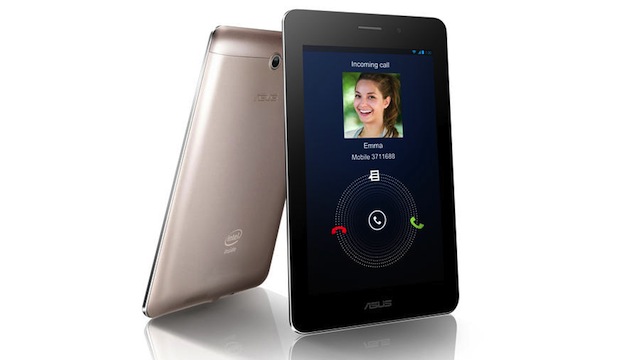 Blurring the lines between tablet and smartphone even further is the Asus Fonepad, described at MWC 2013 as “a phone that’s also a tablet” by makers Asus.

And though it makes calls, at 7-inches we’re cautious to even use the dreaded “phablet” term around the Fonepad. In the size stakes its more or less the same as a Google Nexus 7 or Amazon Kindle Fire HD, neither of which we’d hold up to our ears for good long chat in a hurry. Those looking to nab a FonePad had best get used to wearing a Bluetooth headset, or at least be prepared to build up their biceps a little before attempting a call.

Ridiculous over-sizing aside, it’s looks a solid device. That 7-inch IPS screen is running at a respectable 1280×800 resolution, with an Intel Atom Z2420 processor running the show.

A 3MP/720p rear camera is also onboard, while storage space can be expanded through the use of microSD cards.

Expect to see it in clown-sized pockets come March.