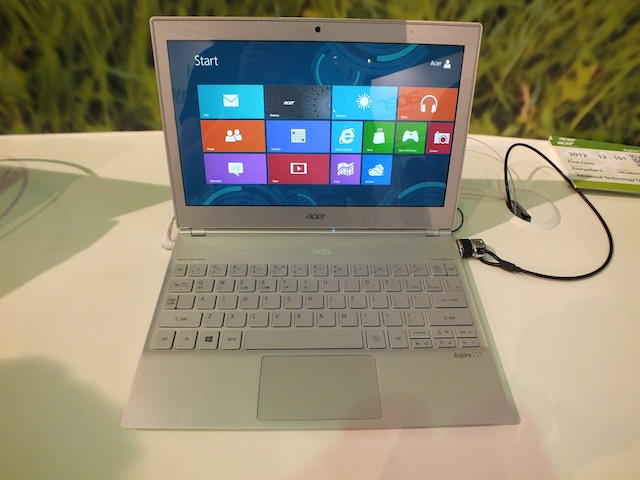 The Ultrabook revolution is in full swing now, but with the arrival of Windows 8 just over the horizon, the evolution of the laptop is taking yet another turn. This time it’s the implementation of touchscreen controls, seen in almost every top-level Ultrabook on show at IFA 2012 in Berlin this month. Among our favourites was the Aspire S7 Ultrabook from Acer. Read on for our initial thoughts.

Available in 11-inch and 13.3-inch sizes, the Acer Aspire S7 shows the company adding a real premium feel to their Ultrabook line. We had a short play with the 11-inch model, weighing in at 1.3KG and 11.9mm thin, and came away impressed with its luxurious build quality. Made up of an aluminium-magnesium alloy, its sleek, thin profile may take its cues from the MacBook Air school of industrial design, but its got a few tricks of its own up its sleeve too.

Whether playing with the 11-inch or 13.3-inch models, you’re getting a full HD 1080p multitouch display, which makes swiping through Windows 8’s “Modern UI Style” Metro interface a breeze. It works better on the smaller model; from a purely practical standpoint, you’ll be that little bit closer to the screen when using that model, making tapping the screen a little easier. For power Windows users it may feel an extraneous feature, but in this age of the tablet, it’s surprising how many tech newbies see a screen these days and try to tap away at it. 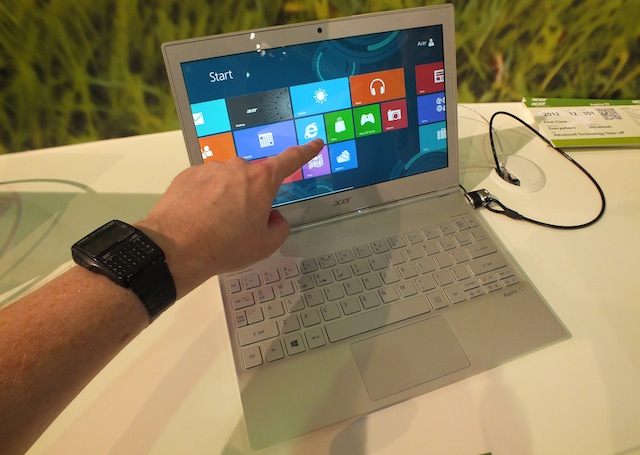 With Windows 8 and devices like the Aspire S7, they’ll be able to do that in a laptop now too, whether or not the form factor is the most fitting or practical application of touch-tech; when a touchscreen is involved, we think that “transformer” tablets with detachable keyboards still make the most sense for work and play. Regardless, the Aspire S7’s touchscreen was very responsive, meaning that when paired with the right finger-friendly apps it’ll hopefully amount to more than just a novelty inclusion.

An Ivy Bridge generation Intel i7 Core helps to make the machine feel so zippy, while cheaper models can be kitted out with an i5 Core. Paired with 4GB of DDR3 RAM and as much as a 256GB SSD, it’s lining itself up as a real workhorse. A Gorilla Glass panel on the screen also means it’ll take as much prodding as you care to throw at it, though that did lead to a slightly glossier screen than we’d personally care for.

Equipped with 2x USB 3.0 ports, a HDMI port and a multi-card reader, the keyboard on the Aspire S7 is backlit and in a chiclet layout. There was a good feeling of travel to the keys from our brief play with the Ultrabook, with keys spaciously laid out. The same goes for the generously sized trackpad, which was responsive and far bigger than you’d expect from an 11-inch model.

It’s a good showing from Acer. If they manage to get the pricing right, they’ve potentially got a very popular little machine here. Even if touch screens on laptops seem a little extraneous right now, your feelings (and ours) may very well change when given extended time with Windows 8. At the very least it’s a nice bonus addition to the machine, if it doesn’t push the cost up too greatly.