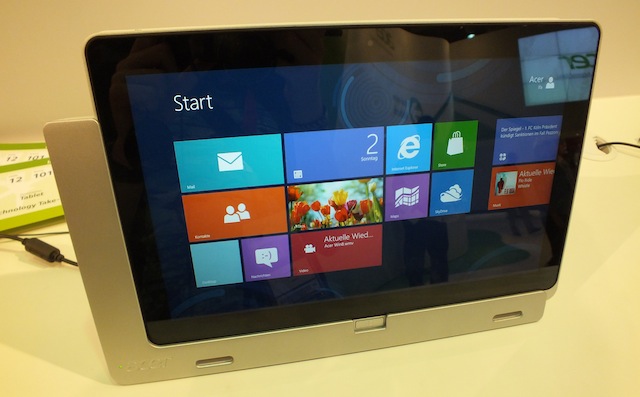 As with Ultrabooks, Windows 8 tablets were ten-a-penny at IFA 2012. While most opted for either an optional keyboard dock or regular slate-style format, the Acer Iconia W700 Windows 8 tablet took a slightly different approach, being paired up with a sturdy docking station. Read on for our initial thoughts on Acer’s latest Windows tablet.

Packing in either Ivy Bridge Core i3 or i5 processors, the Acer Iconia W700 runs full Windows 8 (not the RT version) on an 11.6-inch Full HD 10-point multitouch screen. Though described by Acer as “Ultrathin”, at 11.9mm for a tablet, that’s not really thin at all. Squeezing in those powerful Intel Cores in this case has necessitated a chunkier design for improved heat dissipation, as seen in evidence by the slightly unsightly air vents on the top, next to the lock button. The overall design, though not slim, is attractive still, using a mixture of aluminium and white plastics.

However, though perfectly useable as a stand-alone tablet device, Acer are really positioning the Iconia W700 as a mobile desktop replacement. A stocky docking unit lets the tablet sit in either landscape or portrait orientations, at angles of either 70 or 15 degrees for easy touch access. With three USB 3.0 ports, a mini-HDMI output and even a Thunderbolt connection, you’ll be able to hook up a full size keyboard and mice without any problems, turning the tablet into a worthy desktop machine. 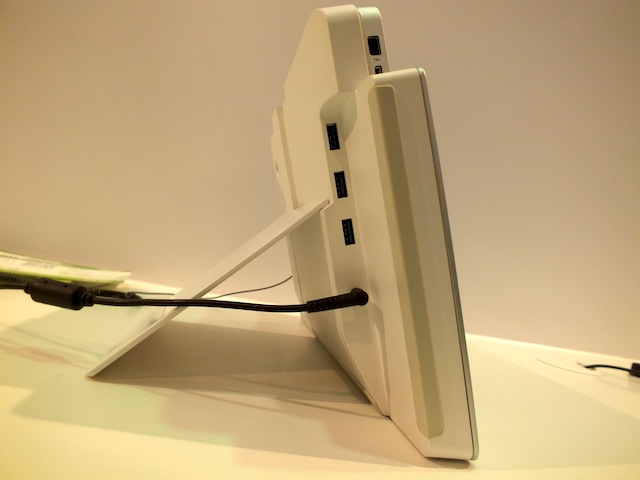 Though our time with the device was limited, and we couldn’t try the tablet with the aforementioned accessories hooked up, we’re confident that the i5 Core, and even the i3 Core, will be suitable for getting real work done. It’ll be even better if Acer can manage to throw the dock in as an included part of the package, though that’s also tempered by the need for an affordable price point.

Speedy SSD storage in either 32 or 64GB sizes again showcase the Iconia W700 as a serious bit of kit, though anyone looking to use the tablet beyond Windows 8 apps in a professional capacity will likely need to bag some form of external storage if they’re hoping on holding onto a reasonably sized media catalogue. 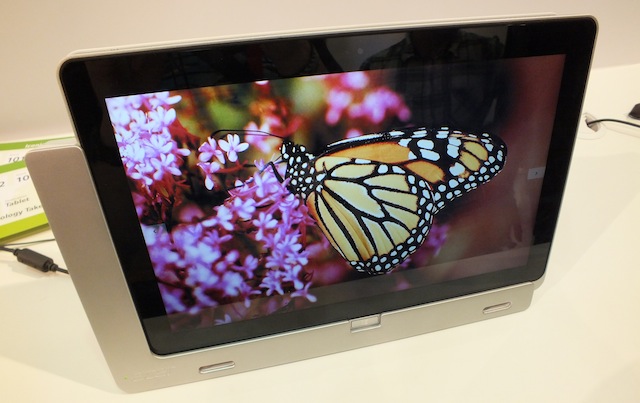 8 hours of battery life and as much as 2 weeks standby time make the Iconia W700 tablet good for an intensive work day’s worth of usage, while Wi-Fi, Bluetooth and front and rear cameras (1.3MP and 5MP respectively) round out the spec sheet.

As a multipurpose device, the Acer Iconia W700 looks set to shine when Windows 8 launches in October. It’s not the sleekest tablet, nor the most portable, but looks set to offer the best of both worlds for those who need a full-blown Windows 8 experience with some added mobility to boot. We’re looking to bring you a full review of the device in the coming weeks, so stay tuned in for more details soon.