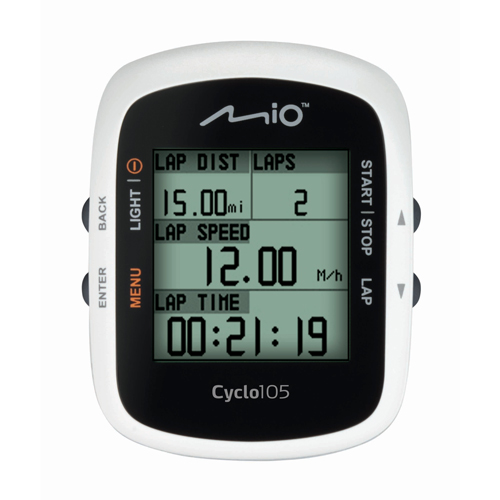 Kicking off with the Mio Cyclo 100, it tracks time, speed, distance and calorie consumption alongside GPS data, all visible through a 1.8-inch anti-glare screen. Tucked into a compact design that clips onto your bike, it’s IPX7 certified for water and dust proofing, with an 18 hour battery life. There’s also a “workout partner” onboard to push your training regime to the limit, with a desktop companion app for tracking your workout goals and sharing them online.

Moving onto the Mio Cyclo 105 (pictured), it features all of the above, plus a built-in ANT+ sensor, connected to a heart rate monitor, cadence and wheel sensor. The Mio Cyclo 105 H adds in a wireless heart rate monitor to the above, while the top-of-the-line Mio 105 HC has everything listed above, but is designed to withstand the rugged, demanding schedules of competitive mountain bikers.

“After the successful launch of the Mio Cyclo 300 series in May, we are now very proud to announce an extension of our bicycle GPS-portfolio, with a new range of bicycle computers for the sportive cyclist,” said iet Deschuymer, Vice-President Sales & Marketing MiTAC Benelux.

“Cyclists in search of the ideal everyday training companion can choose from the Cyclo 100 series; which offers four different packages. The Cyclo 100 series always has the optimal solution to suit the needs of every sportive user.”