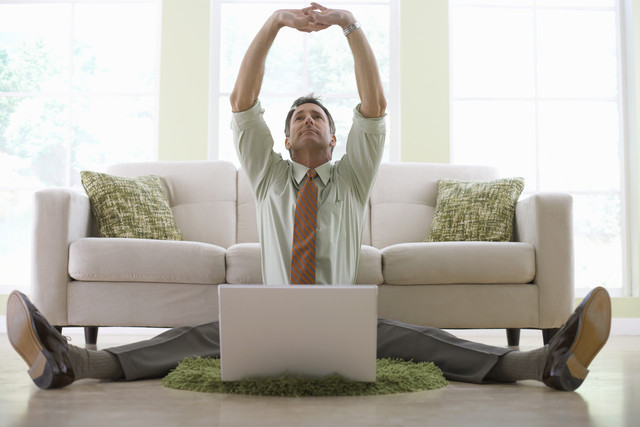 Forget the naysayers; the London 2012 Olympic Games are going to be great. Sure, it’s been expensive, and some of the organisational stuff has been fluffed slightly, but it’s gonna be a hell of a show, with the world’s greatest living athletes all duking it out.

What isn’t going to be easy however, particularly for Londoners, will be getting to work. There are expected to be an extra million tourists using London’s public transport system every day while the games are on, while roads are being diverted and certain lanes cut off for all but prioritised Olympians and officials. The commute is going to be a nightmare.

But in this web-connected world of apps and clouds, it needn’t mean your work or business has to ground to a halt. There are plenty of ways to get the job done from the comfort of your home. And you never even have to get out of your pyjamas either! As part of the Tech Digest Tech Pentathlon, we highlight some useful tools for working from home during the games.

Virtualise your work desktop with LogMeIn or Parallels 7

LogMeIn Pro is a great service if you’ve got to have access to your exact work desktop while at home. A remote desktop virtualisation application, it gives you full control of a remotely located PC from either a home machine or mobile devices like tablets and smartphones.

The functionality offered by LogMeIn is really impressive. As well as full access to your desktop applications and files through a very intuitive UI, it fully supports HD video and audio streaming, makes synchronizing large databases of files very simple, offers screen sharing with colleagues and even local printing of remotely stored files.

While LogMeIn as standard supports iOS devices, pair the software with the LogMeIn Ignition mobile apps and you extend its potential even further with full Android and Windows Phone 7 support.

If you’re a Mac user, things can be a pain as many offices use Window based systems, making some programs you use regularly for work inaccessible through Mac OS X. If that’s a problem, pick up Parallels Desktop 7 for Mac

Parallels lets Mac users create a virtual Windows desktop on their Apple machines, and run both side by side, or in “parallel” if you prefer. It effectively puts all Windows applications at the fingertips of Mac users. Though Mac OS X’s built in Bootcamp functionality is similar, it locks you into one operating system or the other, making working across both simultaneously impossible.

Using hypervisor technology, each operating system (when in use) is able to harness practically all the machine’s power, meaning even intensive applications run near their maximum potential. There’s even support for Chrome, Ubuntu and other operating systems, including the latest Windows 8 preview build.

Parallels offers further flexibility when paired with the Parallels Mobile app. With it, you can access all your Mac and Windows functionality from an iPad, iPhone or iPod touch, making it just as easy to work down the pub as it is your home office during the sporting festivities.

“Planning ahead to minimise disruption during the Games is vital,” said Kim Johnston, vice president of marketing for desktop virtualisation and Mac at Parallels.

“It is important for businesses and workers to quickly look at technology they can simply implement in the time left to help ensure they can work as productively as possible. For example, the ability to run Mac and Windows applications simultaneously on one computer and access them remotely via iPad and iPhone can give workers the flexibility to be productive from anywhere.”

The days of having to back up all your files to DVDs and external hard drives are over. We’ve entered the age of cloud storage, making it easier than ever to work from home, with all your important documents backed up and synced automatically. Cloud storage services are simple to use, and many offer sizeable amounts of free storage alongside their premium offerings. Four popular services are Google Drive, Apple’s iCloud, Dropbox and Microsoft’s SkyDrive.

Dropbox is our personal favourite. It easily lets you share folders for collaborative projects, drag-and-drop files for syncing, password-protect shared folders and automatically sync across multiple computers and devices. It uses an API that many other app and software developers already integrate into their own tools too. Though it only offers an initial 2GB of free storage, you can quickly bump that up to 18GB of free storage through a referral incentive. Premium paid for options are also available. A particularly snazzy feature for mobile users is that Dropbox will automatically sync your camera shots if you let it, meaning you never need to dig out that sync cable again. As well as Windows and Mac desktop clients, Dropbox supports Android, iOS and BlackBerry mobile.

Google Drive offers 5GB of free cloud storage, and supports public file sharing, file encryption and drag-and-drop syncing among many other features. Integrating Google Docs, you’ve also got access to a great web based word processor, and opens 30 different file types right inside your browser. In terms of mobile support, so far Google have only stumped up a dedicated Android app. There is also 10GB file size limit, that may turn off video editors. Again premium offerings are available.

Apple’s iCloud gives 5GB of free storage, and is locked into Apple’s ecosystem meaning it only works across iOS and Mac OS X devices. However, it seamlessly syncs documents across devices, and integrates with the Time Machine back-up service so that any changes you make to a file don’t have to be irreversibly destructive. Its scope is limited, but in true Apple style it handles things so well behind the scenes that you’ll appreciate its simplicity. Further storage space can be bought too.

Microsoft’s SkyDrive offers the most free storage with its 7GB, with its main draw being how well it syncs Office documents from Word, Excel and Powerpoint. It’s similar to iCloud in the way it’s best suited to Microsoft’s own products, but in-browser document editing functions give it the edge.

Web apps make collaborating online a piece of cake. Google Drive is the new home for Google Docs, a web-based document editor that lets you share a document with your colleagues and work on it and revise it in real time, letting you see changes being made instantly, and by whom. It also allows you to create and collaborate on word documents, spreadsheets, presentations and more. It’s not as fully-featured as Microsoft’s Office package, but what it lacks in functionality it easily makes up for with convenience and the fact that it’s totally free.

If you need a more feature-rich, visual collaborative program, try MindMeister. Focussing on mind-mapping, it lets you quickly and effectively plan a project, with a video-style scrubber for rewinding through the history of each project’s revisions and comments. It’s not free though, setting you back £14.99 a month for the business level plan. Individuals can use the software for personal use at £4.99 a month. There’s also a pro tier at £9.99 and all can benefit from a 30-day free trial.

If you still need to have a face-to-face meeting, there are plenty of free-to-use video conferencing apps. Skype is the most popular, with free one-to-one video calling, VOIP conference calling and instant messaging, as well as reduced rates to landlines and mobiles. Cough up £5.99 a month (or just £2.99 a month if you opt in for a 12-month deal) and you can also add group video conferencing and group screen sharing to the mix too. It’ll make your working world feel a lot smaller. As well as Mac and PC clients, Skype is available on a wide-range of mobile platforms.

FaceTime is another free video calling app that’s exclusive to Apple devices. Users of iOS mobile devices with a front-facing camera or a Mac running OS X 10.6.6 and higher can use the service, with FaceTime pre-installed on the devices.