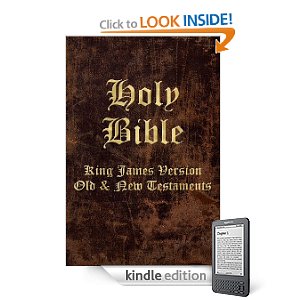 A British hotel is giving its bedside reading material a 21st century makeover. Hotel Indigo in Newcastle have announced that they are swapping out their traditional paperback Bibles for an Amazon Kindle in each of their 148 guest rooms.

£5 worth of credit will be popped onto each device so that members of other faiths can download their religious tome of choice too. Guests will also be able to download further titles, with the charge being added on to their final stay fee.

On trial in the hotel until 16th July, with a possible roll out across the entire Hotel Indigo chain, it’ll be great news for those looking for a good read while away, without having to bring their own valuable devices of weighty hardbacks. What with all the free reads available on Kindle, it needn’t cost guests a penny either.

“In the 18th Century, Newcastle was one of the largest print centres in Britain and we’re in Grainger Town, close to the Literary and Philosophical Society,” said Adam Munday, the hotel’s general manager.

“We wanted to reflect this literary history in a very contemporary way, so are offering guests the use of cutting-edge Kindles pre-loaded with The Bible, instead of the more traditional hardcopy Gideon’s Bible that they would expect to find in a hotel.”

Sounds like a great idea to us. So long as visitors don’t use that £5 credit to download Fifty Shades of Grey instead of the “good book” of course. Cleaning staff have enough to be getting on with as it is…