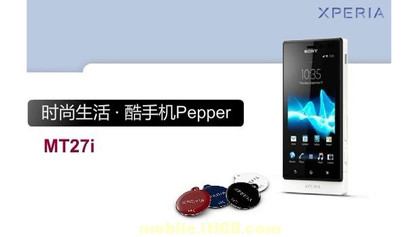 Sony’s next smartphone, codenamed the Xperia Pepper, has appeared online, seasoning the web with sprinklings of leaked shots.

Apologies for the puns, but with a name like the “Pepper” we couldn’t help ourselves. Thankfully, it’s likely that the name will change before the smartphone hits stores, with the Pepper continuing in the recent Sony identifying-letter naming tradition, the same as the Xperia U, S and P handsets.

So, other than ample opportunity for food-based puns, what else does the Xperia Pepper offer?

According to the latest reports (the phone was first spotted a little while ago on a leaked Sony product roadmap) the Pepper will feature a 1GHz dual-core processor, 3.7-inch FWVGA (480 x 854) screen, Android Ice Cream Sandwich and a 5MP camera with 720p video recording.

Thanks to the Smart Tags also visible in the leaked image above, it now seems easy to confirm that the Pepper will have NFC Technology inside too, as seen with the Xperia P.

Expected to land in April, the Pepper will ship at around the £250 mark.