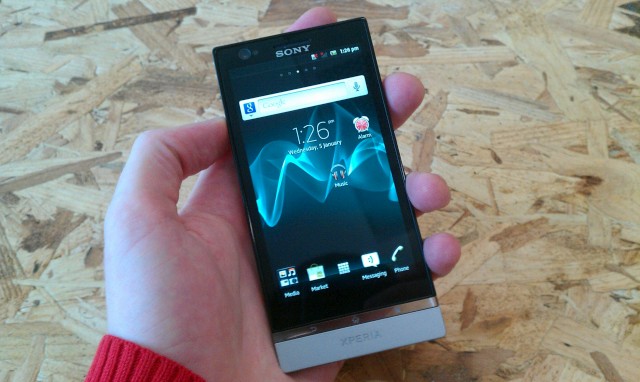 Alongside the Xperia U, Sony launched another mid-range smartphone at Mobile World Congress 2012 this week in the shape of the Sony Xperia P. We went hands-on at a recent London preview event.

The Xperia P sports a 4-inch “Reality Display” featuring a new screen technology called WhiteMagic. It adds a fourth sub-pixel to the standard RGB scale, much like the yellow sub-pixel added in Sharp’s fairly recent line of Quattron TVs. Where Sharp used a yellow sub-pixel to add richer, warmer colours to their screens, Sony however are using a white sub-pixel to boost brightness.

WhiteMagic kicks in when the the phone’s light sensor picks up strong readings, such as when in direct sunlight. This somehow fires up that sub-pixel, giving an extra brightness boost for outdoor daytime use. When sat side by side with the Xperia U in strong light, there was a noticeable difference in their maxed-out brightness levels. Paired with Sony’s Mobile Bravia Engine technology, it resulted in a very vibrant, colourful display.

Like the Xperia S, the phone has a transparent strip towards the bottom edge of the phone, lighting up when call or text notifications come in, as well as when you’re tapping away at the home, menu and back keys. We’ll expect you can turn this off too if it proves a battery drain, but when set in the aluminium unibody case, the lack of any visible joining method makes for quite an eye-catching design. 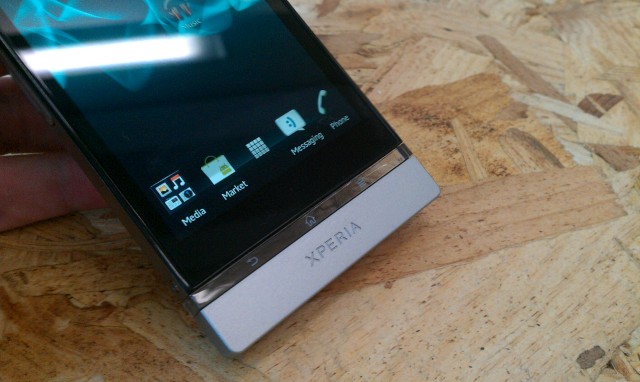 Not quite as powerful as the Xperia S, the Xperia P is still a strong performer thanks to a 1GHz dual-core chip. It fired up apps with speed and swiped through menus with ease. It also gives a speed boost to the 8MP camera onboard which, like with the Xperia U, can be booted up from standby and capturing your first image in just 1.3 seconds. Any images or videos captured can then be shared smoothly across HDMI, or through DLNA if you have compatible A/V devices.

NFC-enabled, the Xperia P can be used with a series of “Smart Tags” to change phone settings and carry out other tasks on the fly. Two-penny sized circular NFC accessories, these can be programmed in all manner of ways, firing up apps and switching on and off connectivity features to name just a few of the stackable tasks that can be carried out simply by placing the phone in close proximity to them. Sadly, the NFC tags cant be programmed to carry out in-app commands; you’ll be able to open your music app for instance, but not specify which artist and track to instantly play.

In terms of software, the Xperia P will be shipping with Android Gingerbread, which will be followed up with an Ice Cream Sandwich update shortly after the phone’s proposed April launch window.

All in, it’s looking a very capable smartphone. We’ll try to get our hands on one for a full review in the near future, so keep your eyes peeled for more on the Xperia P.