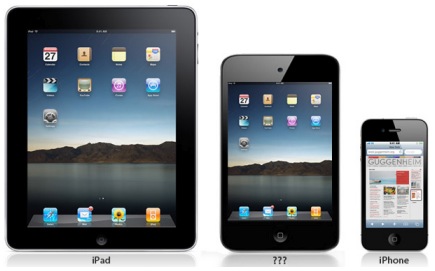 Apple are widely expected to reveal a Retina-display packing iPad 3 this week, but a newly unearthed document from rival Samsung (of all places!) suggests that this won’t be the only Apple slate we’ll see touching down this year. It appears a long-rumoured “iPad Mini” is on its way too.

The document acknowledged that Apple “plans in 1Q12 to launch the iPad 3”, but also goes on to say that Apple will release “in 3Q12 a new 7-inch product temporarily referred to as the iPad mini”.

It’s far from the first time we’ve heard similar rumours. Up until the unvieling of the iPad 2 there had been talk of a cut-soze version of the tablet, and even more recently DigiTimes hinted at a smaller, more affordable iPad launching between July and September.

However, the late Apple great Steve Jobs was vocal in his disgust for small-form factor tablet devices, comically stating that users would have to “sand down their fingers to around one quarter of their present size” in order to use them comfortably.

But with Amazon’s Kindle Fire proving that smaller devices can do a roaring trade in the US market, perhaps new Apple CEO is eyeing up another potential Apple money-spinner.

One thought on “Have Samsung already outed the iPad Mini?”