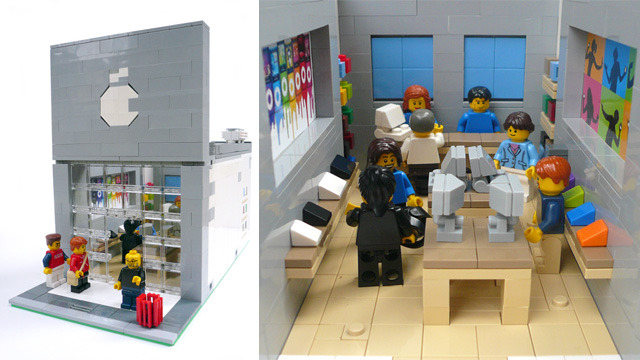 Would you buy a Lego kit that lets you build your own Apple store? If the answer is yes, there’s now the (incredibly slim!) possibility that you’ll be able to in the near future!

Lego Cuusoo user “gotoandbuild” has designed the Lego Modular Apple Store, letting users take a look at his creation and (if he manages to get the approval of 10,000 Lego fans) push for Lego to turn his kit into a real boxed retail offering. Providing they can also get Apple’s approval too.

“At roughly 800 pieces, it packs a lot of details”, reads gotoandbuild’s description.

“[There is] Steve Jobs, customers, employees, iPhones, iPads, iPods, MacBooks, iMacs, a Mac Pro, a Genius Bar, shelves of accessories, and fanboys lined up outside for the new iPhone (note that the second in line is annoyed that he’s not first). I kept the gender spread of the figs even while using the more interesting classic yellow faces.”

So what do you guys think of it? Expand it a little so it doesn’t look so cramped, and maybe throw in a free interactive Lego app and we’re sold.

If you’re interested in showing your support, or just fancy trolling gotoandbuild for his lack of “to scale” detail, head over to the project’s Lego Cuusoo page.