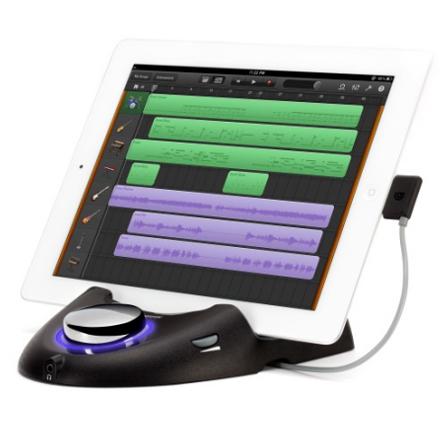 Griffin are doing a great job of catering for budding musicians on the iPad at CES 2012, adding two new music-making tools that beef up the potential for sonic creativity on the Apple slate.

First up is the StudioConnect, which, when combined with the GarageBand app, turns your iPad into a feature-rich portable music studio.

An all-in-one interface, it handles audio and MIDI-IN, as well as MIDI-Out connectivity. Instruments and mics can be hooked up through a mono 0.25-inch connection, as well as plugging a mixer into the stereo 3.5mm jack.

Left and right line-level RCA plugs are onboard, as well as a 3.5mm stereo headphone jack for monitoring your creations.

Griffin have also launched a slightly more basic music tool called MIDIConnect. It adds a standard 5-pin DIN MIDI-in port to your iPad, letting you plug in guitars, keyboards and the like, as well as a MIDI Out port that can be used to turn your iPad into a MIDI controller, at a fraction of the cost of a dedicated one.

“GarageBand has put powerful audio production tools within reach of any musician with an idea and an iPad,” said Mark Rowan, president of Griffin Technology.

“We’ve made it easy to connect your real instruments with GarageBand and control every aspect of your project.”

StudioConnect will be available from February for $149.99, with MIDIConnect landing sometime in the spring for $79.99. No word on UK pricing yet or availability, but Griffin usually do a good job of getting their gear over here at roughly the same time.