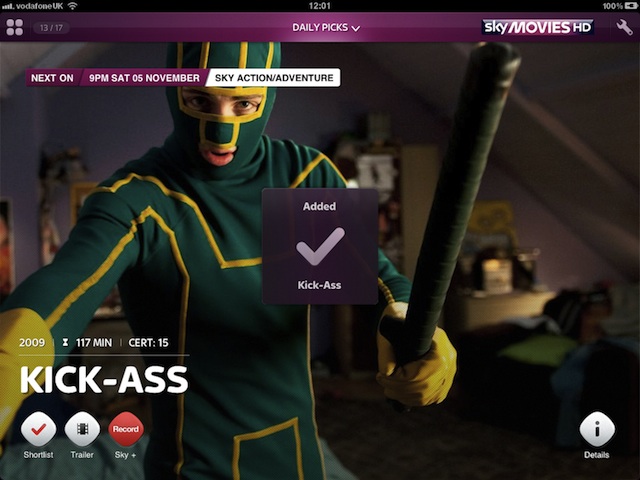 Today sees the launch of a free Sky Movies app on iTunes for iPhone, iPad and iPod touch. This App will allow existing Sky customers to quickly access and find movies from their portable devices.

The App follows in the footsteps of Sky Go and Sky+ Apps linked to the customer’s Sky TV package providing up to date information on all Sky Movies and Box Offices releases, including future releases via thumbnails or full page views. Another extra feature will be the inclusion of providing information on movies currently being aired in cinemas.

All films featured in the Sky Movies packages include a review and the options to remote record the movies to your Sky+ HD box to watch at your convenience or watch it on demand with full Sky Go integration. Offering Top Picks of the day, movie trailers and reviews of the latest films on the services, Sky is hoping to give customers more value for their subscriptions.

“We are really pleased to be able to add the Sky Movies app to our already strong offering of iPad and iPhone apps. Combined with the Sky+ and Sky Go apps customers now have even more ways to discover and enjoy the films they want to watch, either at home or on the move. We continually strive to give our customers the best possible movie service and this is just one additional feature out of many we have planned for Sky movies over the coming months.”

With such a large client base it is only logical that Sky begin to reach out to their customers on-the-go, not just in their front rooms. The strongest feature in this app for me would be the ability to now watch films on the move with Sky Go with the App switching over to allow you to watch it straight from your mobile device.

Sky have also confirmed that an Android version will be available early next year but with no confirmed release date.