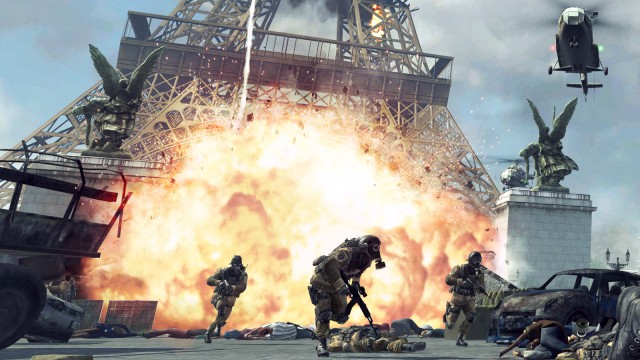 A good chunk of the adult population has called in sick this morning to indulge in the cultural phenomenon that is Modern Warfare 3, the latest installment of the mega-popular military shooter franchise.

One person who most certainly won’t be pulling a sicky to play Modern Warfare 3 this week is Suffolk University Professor Nina Huntemann. She feels that games like MW3 and Battlefield 3 glamourise warfare and profit from our fears of major terrorist attacks like the 9/11 Twin Towers massacre.

“Since the attacks on 9/11, the largest publishers in the videogame industry have profited from fear and anxiety about terrorism,” she said in a press release.

Huntemann is the author of Joystick Soldiers: The Politics of Play in Military Video Games, which explores this concept further.

“[Military video games] reduce military intervention to narratives about weapons systems and how we fight,” she wrote.

“As the U.S. government debates federal budget priorities that include decisions about military spending, it is difficult to have a thoughtful national conversation about the strategic use of the armed forces when the overwhelming attention to military conflict in the entertainment media is focused on treating war as a game.”

So do game publishers (and the makers of Battlefield 3 and Modern Warfare 3 in particular) turn a profit from our fears of terrorism? To an extent yes. The games have an almost fetishistic focus on the power of modern weaponry to maim and kill, and have simplistic narrative thrust that turns global military intervention into a fast-paced shooting gallery, where death is cheap and without consequence.

I’m a hardened gamer, and have played more gory games than I could possibly list here, and even I felt a little quesy with a few particular sequences in Modern Warfare 3, despite loving the game as a whole. Check our full single player review of the game to see what I mean.

But do games profit from our fears any more than movies, TV shows, or the wider media such as newspapers and magazines? Not really; films like Die Hard and Speed walk a fine line between exciting our desire for adrenaline and digging at our fears of terrorist activity. Even military fluff like Pearl Harbour looks to rekindle the fears of conflicts passed. Newspapers sell issues by covering the front page with giant images of destruction – no news is good news.

While pointing to other media forms that also play upon the public’s fears is no excuse for video games indulging in the same practices, they certainly shouldn’t be used as scapegoats or the only culprits in this argument.