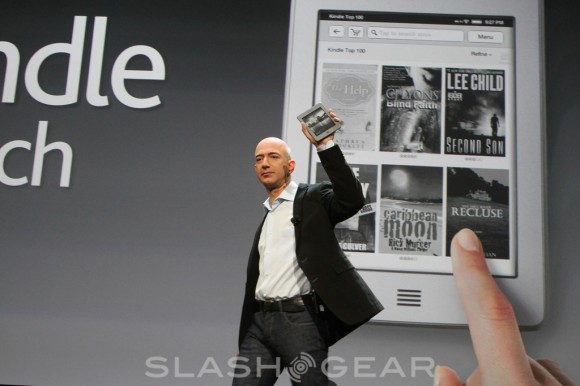 Amazon’s eReader range is about to get finger friendly with the launch of the Kindle Touch and Kindle Touch 3G.

The touchscreen readers with e-ink displays were revealed by Amazon CEO Jeff Bezos today, doing away with the regular Kindle’s QWERY keyboard set-up in favour of an IR touch system.

Lacking physical page turn buttons, tapping either side of the screen will now skip forwards or backwards through an eBook, without compromising the Kindle line’s excellent battery life and glare-free screen.

The new Kindle also brings with it a brand new feature called X-Ray. As well as bringing up dictionary definitions, tapping on a word also brings up Wikipedia information relevant to the text you are reading, which is downloaded alongside your eBook. Bezos used the Remains of the Day eBook as an example, which brought up a pertinent Wikipedia entry on the Treaty of Versailles through the X-Ray feature.

Despite the touchscreen tech, Amazon have managed to keep the pricing low. A Wi-Fi only Kindle Touch will cost just $99 at launch (around the £63 mark if converted directly into pounds, though we expect it to launch in the UK closer to the £100 mark).

The 3G Kindle touch (which like the existing 3G Kindle offers free mobile browsing and eBook downloads without a costly subscription or network fees) will cost $150 (£96).

No word on a UK release date yet, but both Kindle Touch models go on pre-order today, with US shipping beginning on the 21st November.