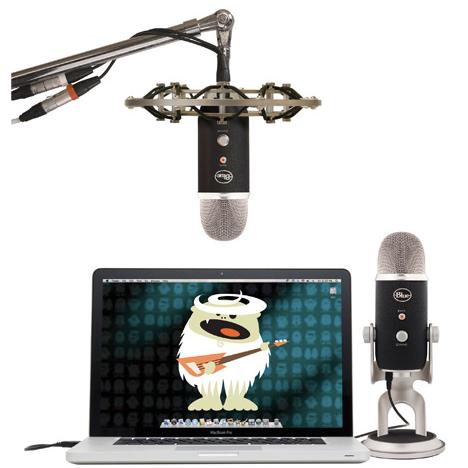 Blue Microphones set themselves a high standard when they released the superb Yeti microphone, but they’re out to top even those lofty aural heights with the Yeti Pro. Could this be the finest USB microphone ever built? Read on to find out.

The Yeti Pro is a sturdy as it is big and beautiful. Rising 29.5cm in its included stand and weighing 1.55 kg with the base attached, the textured black and silver metal casing is quite the looker, reminiscent of a 1950’s radio mic in some respects. It’s about as far removed from the cheap plasticy USB mics that dominated for so many years.

Now the original Yeti was a great mic, so much so that we thought it’d be hard to top. But the Yeti Pro is full of so many extra bells and whistles as to completely justify its premium price tag.

The first thing you’ll notice from this successor is the 5-pin XLR connector on the bottom as well as the usual mini-USB port, allowing for stereo analog recordings. As it’s stereo, it’s not your standard 3-pin connection, but Yeti throw in a converter cable to make hooking up analog connections pain free. It’s worth noting too that the volume knob on the Yeti Pro’s front dial is a digital one as opposed to analog, so you can keep pumping that dial up infinitely here, and will have no bearing whatsoever on input volume on analog recordings.

XLR support would be reason enough to give this model its “Pro” suffix, but Blue go the whole hog and add the ability to capture 24 bit/ 192 kHz audio too. The accuracy of the Yeti Pro therefore is quite astonishing. With three custom condenser capsules and four mic patterns (Stereo, Cardioid, Omnidirectional and Bidirectional) you’ll easily be able to configure the mic to be just as effective at picking up full-room live band recordings as a simple voice-only podcast. Either way, the sound going in is almost identical to the resulting recording, with the high resolution sound files produced revelatory in their clarity.

A headphone jack also sits on the underside of the Yeti Pro. Recognised as a full USB audio device, the Yeti Pro therefore allows you to use your headphones to fully monitor playback, with zero latency, adding to the flexibility of the kit.

If you hadn’t already guessed, it’s an incredibly sensitive mic. While in many cases this is a blessing, there are a few occasions when this could frustrate too. It’s a joy to be able to pick up quiet sounds without worrying too much about recording levels, but this of course has certain downsides too. Recording just a few minutes of spoken audio with the cardoid pattern in 24 bit mode, with the Yeti Pro standing on my computer desk, the mic picked up the whirring of my external PC disk drive. It’s fantastic that a USB mic has sensitivity levels this high, but you’re going to have to make sure your environment is pitch perfect before hitting the record button.

Likewise, it’s a bit annoying that there isn’t a quick-switch option to swap quickly between analog and digital recording settings. As it stands, you’ll have to physically unplug the analog connections before making a digital recording. It’s not ideal, but unusual for dual analog/digital mics either.

The Yeti Pro oozes quality. From its construction to the clarity of the recordings it produces to the flexibility afforded by the dual USB and XLR connections, it’s head and shoulders above the competition. But quality comes at a high premium however, so unless you’re a dedicated musician, podcaster or video editor, cheaper alternatives may suffice. They’ll unlikely sound anywhere near as good though.