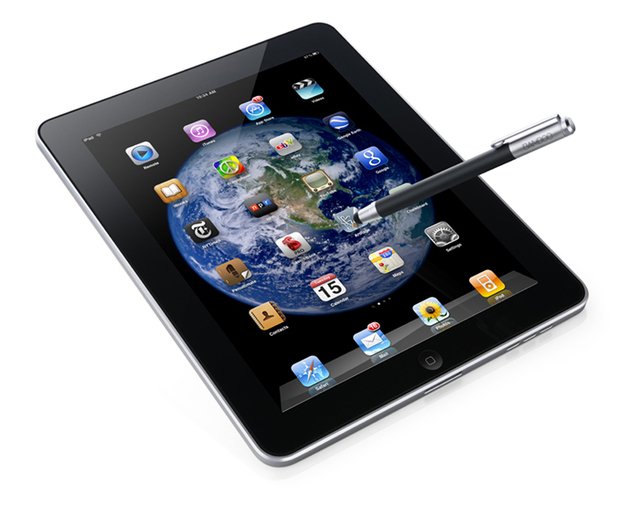 Earning your place among the iPad accessory elite in a market already so cluttered is difficult enough, but for touchscreen styluses it’s even harder. With presumably the majority of touchscreen owners equipped with ten fingers that work perfectly fine on capacitive screens, a stylus is a particularly hard sell. Can Wacom’s Bamboo Stylus for iPad prove its worth, or are you better off just using your own stubby digits for ultimate touchscreen control?

At first glance, you’d be forgiven for thinking that the Bamboo Stylus was a regular ink pen. Though a tad thicker than your average Bic, the rounded pen measures a standard 4.25 inches long. Built from metal, it’s weighted comfortably, slightly heavier at the end you write with. Like a quality fountain pen, you can twist off and remove the pocket clip from one end, as well as replace the rubber nib at the writing end. All in, it’s well constructed and comfortable to use, and feels far more sturdily built than the majority of throwaway stylus pens available, justifying its slight price premium over the competition in this regard.

The nib is of course the most important part of any capacitive touchscreen stylus, and has at times been a tough cookie to crack for manufacturers. Whereas the resistive touchscreens of old relied on pressure and worked well with many pointy, hard stylus shapes, modern capacitive screens work through conduction, letting them respond to the slightest touch from a finger. In the past, capacitive stylus pens have used foam tips to replicate finger inputs, but they’d deform over time and become useless. Most newer styluses instead take the approach of using a hollow, squidgy rubber tip, and so too does the Bamboo Stylus. There’s no magical circuitry going on inside the stylus here, just a rubber tip getting the job done.

The Bamboo Stylus is as accurate a capacitive pen as they come, thanks to a nib that’s smaller than the competition at 6mm (based on a claimed 8mm average from Wacom). You’ll be able to sketch and take handwritten notes with pressure consistent to a regular pen, feeling far more natural than trying to do the same with a greasy finger. As a side note then, using the Bamboo Stylus will keep your screen relatively smudge free, so long as you keep the nib away from any greasy or sticky substances. Artists in particular will appreciate the extra control that using a stylus brings, making sketching using apps such as ArtRage or Doodle Buddy, or handwriting apps like Penultimate, far more consistent to the feel of writing with a pad and paper.

It’s a shame then that Wacom couldn’t have made the rubber nib just a tad smaller. Though only the central-most point of the 6mm diameter nib is picked up on the drawing apps, the wide nib can make the finest of details a little difficult to enter. This may be an unavoidable problem, given the iPad needs a certain amount of surface contact to register touch (in line with a finger’s tip) but it’s a niggle nonetheless. Also, though a limitation of the iPad hardware and app software rather than the stylus itself, you’ll notice a delay between inputs and onscreen results with the stylus, which may be off-putting for those used to the instant strokes of pen and paper.

If you’re not an iPad owner, you’ll be happy to hear the Bamboo Stylus should, in theory, work with all capacitive touchscreen devices, be that a HTC smartphone or a Samsung Galaxy tab. The iPad arguably has the most responsive capacitive screen on the market however, so results may vary from display to display.

You’ll have to be pretty big on tablet doodling to justify shelling out £25 for a capacitive stylus, but if you are, there are no finer options than Wacom’s Bamboo Stylus for iPad. A well-weighted finger alternative with a responsive nib, you’ll be an iPad Picasso in no time with the stylus. We’d personally like to have seen a smaller tip, which we believe would have lead to even greater accuracy in our hands, but for the most part this will be a point of personal preference, married with the brush/ tip size specifications of the app you’re using. Highly recommended otherwise.