While gaming headsets are normally of the bulky over-ear kind, the increasingly portable nature of gaming laptops would surely benefit from a pocketable pair of in-ear gaming buds to accompany them too. Enter the Klipsch ProMedia In-Ear gaming earphones, as adept at blaring out the sounds of exploding zombie guts as they are Mozart on your iPod.

Despite costing just around £80, you’re getting a very solid pair of noise-makers here, in both build and sound quality. With a fiery red-and-black design, the small buds fit comfortable in the ear, with a cable long enough to reach even the most well-hidden soundcard or deeply-pocketed MP3 player. A small remote and microphone sits about a third of the way down the lead, with a single button embedded. A clip for attaching the cable to a jacket lapel is also included, alongside a splitter for a laptop’s separate microphone and headphone inputs.

Bobbing along to a range of music, we were pleased with the earphone’s noise-isolating design. While not quite silent, the passive noise cancellation worked very well at blocking out ambient noise; even better if you pick the right size from the three included ear gels (med, large, small/med dual flange). 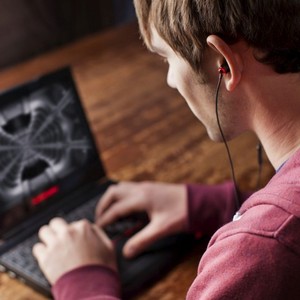 Sonically they were a treat for music too. The harsh mix of sounds on At The Drive-In’s Relationship of Command album were deftly separated, with crystal clear vocals, crunching guitars in the mid-to-high range and sharp snare and hi-hat sounds in the top-end. Bass had a decent kick, but was a little lacking compared to other gaming headsets. Listening to Radiohead’s fairly bass-heavy latest album King Of Limbs felt a tad weaker than we’d grown used to with our standard Astro A40 gaming headset for example.

Testing out the Klipsch ProMedia In-Ear’s gaming guts, we tore through a few missions of Bioware’s original Dragon Age title on the PC and came away very impressed. From the clashing of swords to the crisp voice-over work, the buds nicely enveloped us in the game’s world, with strong separation across the stereo channels giving a decent feeling of movement. Again, bass response in the booming Lord of the Rings style soundtrack was a little weak, but not so bad as to feel tinny by any means.

A quick game of Left 4 Dead 2 over Steam, notorious for its voice-chat compression, received a thumbs-up from our online pals, with the Klipsch ProMedia In-Ear again doing well to avoid hiss or interference in its microphone. However, while the mic worked well for gaming and VoIP PC programs, it’s worth noting that it’s function is limited only to VoIP apps like Skype for iPhone, and not for regular call taking.

They may not pack the bass-y punch of other in-ear headphones, nor the pseudo 5.1 effects that now come as standard in many over-ear gaming headsets, but in terms of versatility, clarity and portability, the Klipsch ProMedia In-Ear are the travelling gamer’s new best friend.