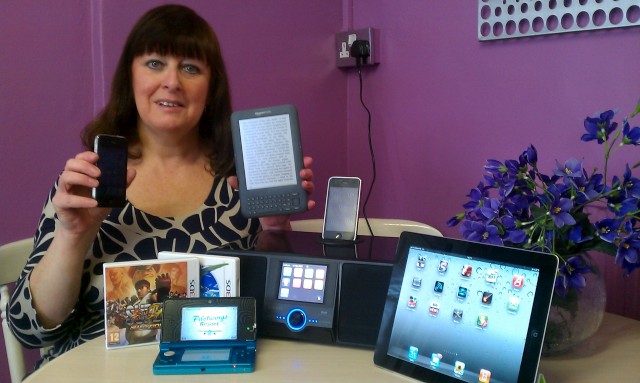 Mother’s Day is just around the corner in the UK (Sunday the 3rd of April to be exact) and, if you’re anything like me, it’s going to be a last minute dash to the shops to pick up something she’d like. Chocolates, flowers and a Michael Bublé CD are the staple gift choices, but what if Mum deserves something a little bit more adventurous this year? Gadgets are increasingly being tailored towards technophobic users with kit like the Kindle 3G, iPad 2 and Nintendo 3DS now billed as family devices rather than just for hardcore users.

And while we’re sure there are plenty of mothers out there who know their way around a smartphone or tablet like the back of their hands, there are just as many who think an iPad is something you get from an optician. How will you know which gadgets would be suitable for them?

By following the advice of Tech Digest’s Mum, that’s how! Falling somewhere between the gadget-phobic and gadget-literate categories, we put five top bits of tech into Bernadette’s hands (a Nintendo 3DS, an iPhone 4, a Kindle 3G, a Robert’s colourSTREAM DAB and Internet Radio and an iPad 2) to see which device she’d most like to own.

Left on her own with each device for an hour, with only minimal input from us tech-heads, read on to see what she thought of each. 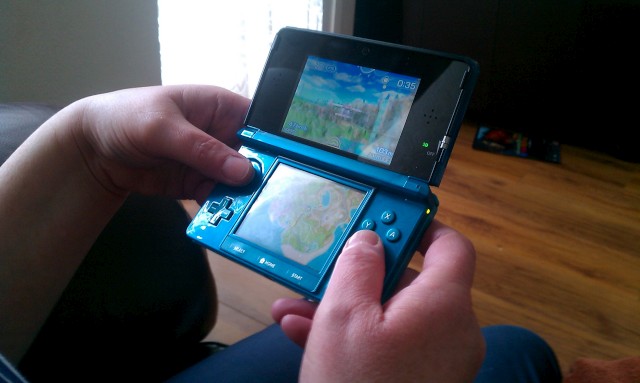 It’s the handheld games console that all the kids are clamouring for, and our full review awarded it a more-than-respectable score of 4/5. But what does our near-sighted mother make of glasses-free 3D?

“That 3D top screen is really good. I’m surprised to see that it actually works like they say in the adverts, but I’m not sure if I’d like to use it for too long. I think it would hurt my eyes. It’s a nice size too, and all the little characters who keep popping up are funny. It’s fairly simple to use and the 3D camera is a nice feature, but I honestly can’t keep up with all the controls in these games. That Pilotwings one was far too difficult to steer, and all the other ones were too fast to keep up with. The speed of them made it difficult for my eyes to focus.” 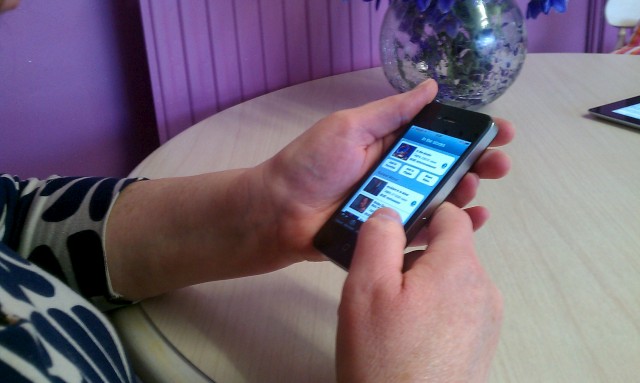 Despite being almost a year old, Apple’s iPhone 4 is, signalling issues aside, still the smartphone to beat. With all those apps and a vibrant Retina display, have Apple done enough to pique Mum’s interest?

“This is very nice. I like its size and design; it looks very clean and tasteful. That screen is really nice too, and I like all the cookery tools and news applications are on there. I really like looking up songs on YouTube too so it’s good that that is in there too. It’s a bit fiddily for me though; I don’t want to have to swipe through loads of screens just to make a call, and I don’t think I’d be able to figure out the internet settings stuff by myself. I can see why people would like it, but it’s a little bit too complicated for me to have more than just a passing interest in.” 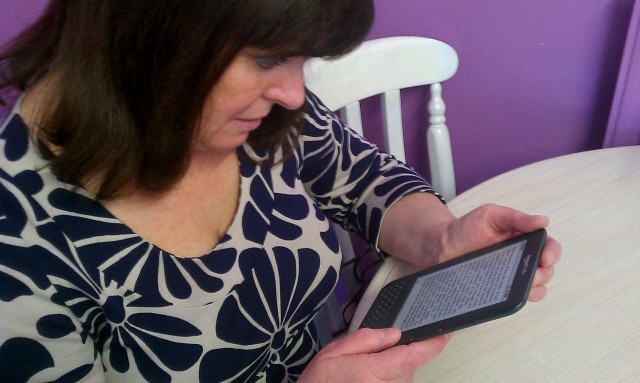 The wave of tablets that has washed over the tech world in recent months has done little to dent the popularity of Amazon’s Kindle ereader devices. The 3G version is the top-spec model, offering a free mobile internet connection and book downloads straight to the device without the need for cables. But will it convince Mum to drop her paperbacks?

“At first the way the screen turns black before every page turn was quite off-putting, but once you get used to that quirk, the Kindle is great. I much prefer buttons over touchscreens, and the way you can buy books straight from the reader is a great idea. It’s light too, and a good size for taking out; I could see myself happily reading on this in the park. The Twitter and Facebook bits don’t interest me much, but I like how you can search for information on Wikipedia with it, as I find that website very useful.” 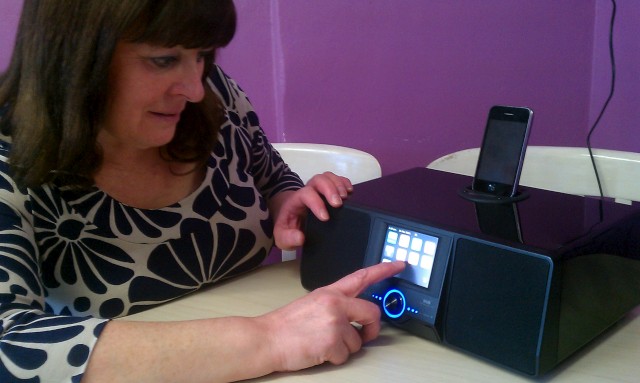 With thousands of internet radio stations, an iPod dock, USB port, DAB capabilities and a colour touchscreen, the Robert’s colourSTREAM radio is one of our favourite music-boxes out there. It’s not without its flaws though, and Mum is quick to spot them.

“That touch screen on the radio was a chore to use. It often didn’t do what I wanted it to, or was too slow to react to things I thought I’d already selected. I don’t think I’d be able to connect it to the internet by myself either, and some of those menus are full of things that I’d never use, like the sound settings. The number of radio stations is incredible though, and I like that I’m able to plug an mp3 player in (via a line-in port – Ed.) if I wanted to. It looks great, but it’s just too much like hard work to use for me.” 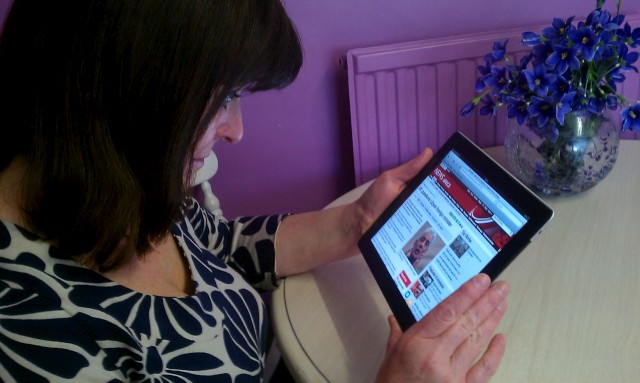 The iPad 2 needs no introduction, being the top tablet on the market at the moment. Access to thousands and thousands of apps, equipped with dual cameras and significantly lighter than its predecessor, this dual-core sequel is a showstopper. Mum’s smitten, but will the price tag sway her choice?

“This is lovely. It’s like the iPhone but bigger I suppose, but I’d feel far more comfortable sitting down with this than the phone because of the size. The screen is nice and easy to read, and I like the App Store and iTunes and all the videos and simple games there are on them. It’s a pity lots of them cost a couple of quid, especially since this thing costs so much money. You shouldn’t spend over £500 on a gadget unless you’re really going to use it a lot, and to me I could find plenty of things more interesting for that amount of money. I can totally see the appeal, but this is a sort of special gift, the kind you should reserve for Christmas or my birthday.” 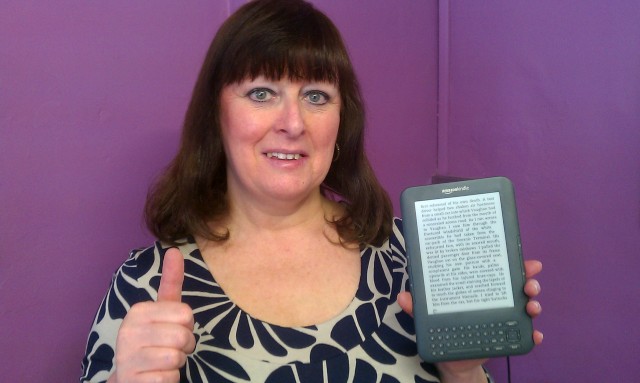 With all five gadgets tested, Mum goes for what many would consider the underdog of the pack – the Kindle 3G.

“They’ve each got little things I like and don’t like about them. The Nintendo looks unlike any screen I’ve ever looked at, but I think it’d hurt my eyes after a while. I’m never really going to sit down and play Mario or whatever on it either really, am I? I like how much you can do with an iPhone, especially YouTube videos, but it looks like all the best of those app things have to be bought afterwards and I can’t be bothered spending more money on something once I’ve already paid lots of money for it in the first place. The same goes for the iPad, though it’s far too expensive in the first place; anyone spending that much money on me for Mother’s Day needs to get their head checked. The Robert’s radio was really good actually, but I’ve already got a radio that suits me fine, and the touchscreen wasn’t as good as on the other gadgets.

“The Kindle would probably be the one I use most often I think. You don’t need to faff around with it like the others to get it to work, and the screen was the easiest for me to read. It’s a shame it isn’t in colour, but I like how simple it is to use and how light it was too. I feel like there’s less I could do wrong with the Kindle, and it’d probably make me read more because of the text size choices. The price is reasonable too. If the iPad was cheaper I’d lean towards that, but I think the Kindle is enough for me.”

So there you go; if you’re looking for a techy-toy for your old dear come this Sunday, it appears the Kindle 3G may be the gadget of choice. The iPad 2 is a close runner-up, and if money is no option, that too is more than worth a look.