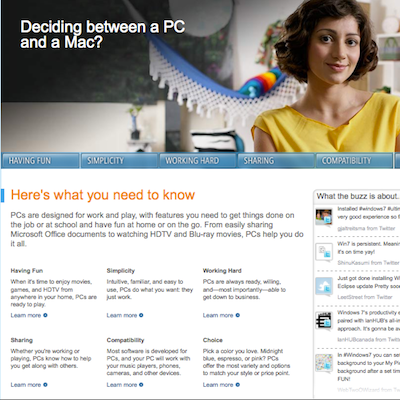 Microsoft have blasted out of the starting blocks in the lucrative “back-to-school computer buying season” race with a fairly blunt attack on Apple’s Mac range.

Posting a page titled “Deciding between a PC and a Mac?” they’ve conjured up a heady mix of fact and opinion to woo computer buyers over to their side of the fence.

“Macs might spoil your fun,” reads one section. “You can’t get a Mac that ships with a Blu-ray player, TV tuner, Memory Stick reader, or built-in 3G wireless. You can with PCs running Windows 7.

“Most of the world’s most popular computer games aren’t available for Macs. And Macs can’t connect to an Xbox 360. PCs are ready to play,” continues Microsoft’s persuasion.

While a purely technical breakdown of both brands would likely have sufficed, you can hardly blame Microsoft for fighting their corner with a touch of bias. Even if Microsoft are a little bit more pointed in their attacks, it’s no worse than Apple’s own “I’m a Mac/ I’m a PC” adverts that pop up every once in a while.