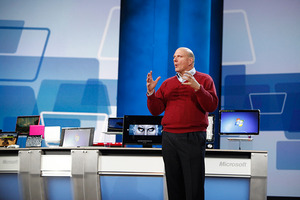 Waiting patiently for a Microsoft Windows tablet to pop up in the shops? Don’t fret; Steve Ballmer is still on it, re-iterating his Worldwide Partner Conference Keynote by promising they will hit shops before the year is out.

“They’ll be shipping as soon as they are ready,” said Ballmer. “It is job one urgency. No one is sleeping at the switch.”

Ballmer also stressed that this would not be a stripped back version of their best selling operating system, but a fully featured OS running on ARM rather than Intel chipsets. “We’re coming full guns,” he said. “The operating system is called Windows.”

He even suggested that the development of Intel’s Oak Trail processors could see the introduction of more battery friendly tablets early next year, though he did take time to praise Apple’s success with the iPad. “They’ve sold certainly more than I’d like them to have sold,” he conceded.