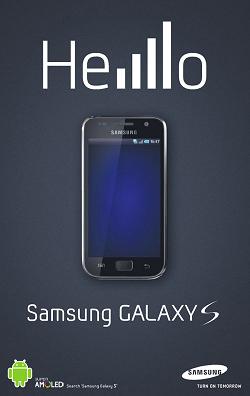 Oh Samsung; who knew you had such a sense of humour! Seeing an opportunity to have a gentle dig at their biggest smartphone rival, Samsung’s new Galaxy S advert cheekily references the iPhone 4 antenna problems that have been giving Apple a headache since launch.

It’s a pretty simple advert really. Just a picture of the phone itself with the word “Hello” above it. But ah…those letter Ls…why, they are made up of full signalling bars! Many “lolz” were had in the Samsung advertising department coming up with this one we’d imagine.

Samsung aren’t the only ones to be a bit miffed at Steve Jobs’ claims that all smartphones suffer from similar “death grip” issues. Nokia and RIM among others have all refuted the claims.