JVC’s Picsio GC-FM1 ultra compact camcorder has a problem on its hands. In the time it has taken to hit shelves, the GC-FM1 is now entering an increasingly cluttered market, with sterling pocket camcorders available from Kodak, Veho and Flip. It costs a pocket friendly £123.99, but is a lightweight price enough to see it fend off the heavy competition?

The GC-FM1 is very light (weighing around 95 grams) and nice and portable at 53.0mm x 97.0mm x 17.0mm. It’s available in three pretty shades (black, blue and pink), but its chromed checker-board finish makes it look a bit like an ugly toy. Paired with the chrome edging which camouflages the exposed mini HDMI, AV out and USB connections, the GC-FM1 feels cheap in your hand, looking a little bit like those fake mobile phones you can pick up for your kids from market stalls.

The back houses all the hardware buttons and the 2-inch LCD screen for viewing video playback. The screen is clear and performs reasonably well, even in direct sunlight. However, the buttons on the back are really unresponsive. The record/select, still/video, delete, playback, and thumbnail buttons work fine, but the ring of buttons around the central trigger button hardly ever responded first time. Add to this some bizarre input command choices (pushing the “Previous” button twice in quick succession changes video quality), and you’ll rarely get to whichever function you were after first time. 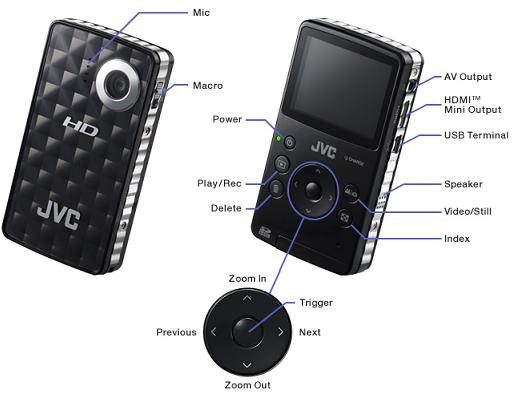 MPEG-4 and QuickTime MOV video files with H.264 compression can be recorded with the GC-FM1. Overall, video quality is rather good; video is sharp, the image stabiliser works well and movement noise is kept to a minimum, even at the highest resolution of 1,440 x 1,080 pixels at 30fps. The Macro Focus toggle is also pretty good, with sharp detail in the image, provided that the ambient lighting is decent. Audio records in stereo which is nice, and though the quality is a little lacklustre, it’s no worse than that found in other similar ultra compact camcorders. Likewise, still 8 megapixel photos take well, though high contrast levels mean a little bit of desktop editing might be needed to get them looking just right.

Though the MPEG-4 and QuickTime MOV files can be easily tinkered with using any number of video editing suites, the bundled software leaves a lot to be desired. Just like the camera’s hardware buttons, it can hardly be called intuitive, with many common functions either hidden by the poor UI or absent altogether, such as contrast and brightness adjustments. Uploading to YouTube is admittedly very easy however thanks to some very clear Wizards, and if publishing to the streaming site is your sort of thing, then the GC-FM1’s software at least has you covered there.

Based purely on the quality of the video and images the JVC Picsio GC-FM1 produces, the camcorder would be able to stand proud against its rivals. However, shoddy build quality, poor software and infuriatingly fiddly hardware buttons drag this contender down significantly.

Buy the JVC GC-FM1 from Expansys