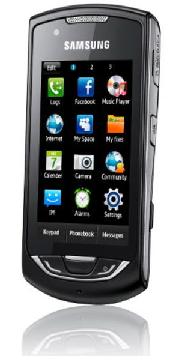 If you’re looking for a phone with plenty of social networking bells and whistles, but without the whopping price tag of a high-spec smartphone, the Samsung Monte S5620 may be for you.

Featuring a 3 inch widescreen QVGA capacitive touchscreen, the Monte S5620 is a mid-range handset that crams in Facebook and Myspace apps, as well as home screen Twitter and Bebo widgets.

Samsung have a few instant messaging applications lined up for the handset, and alongside the social networking apps, it’s good to see there was enough space on the Monte for 3G. That said, the 1000mAh battery might take a bit of a beating if you’re constantly connected.

No price or exact release date yet, but rest assured that the Samsung Monte S5620 will be hitting our shores soon.