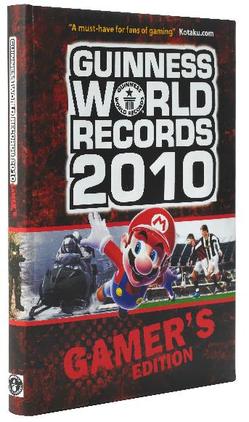 Guinness, the world’s globally-recognised authority on mankind’s record breaking achievements have released their Guinness World Records 2010: Gamer’s Edition. It’s the latest in what is now an annual series, featuring stat-crunching facts on all the top names in gaming, as well as some quirky insights into hardcore fans.

Ever wondered what the best selling game of all time is? Or the most played video game of all time? They’re all in here, along with fun entries that include the largest collection of Pokémon memorabilia and the most people dressed as videogame characters at one time.

It’s great to see that Guinness have also teamed up with Twin Galaxies, an independent body who track gaming records, particularly on old classic arcade titles. In the back of the book you have all the Twin Galaxy records at your disposal to see how your scores stand up against the world’s best. (If you’re interested, you should check out the King of Kong documentary, a heart-warming and hysterical look at Twin Galaxies and the race for the top score on the Donkey Kong arcade machine – Ed.)

It’s a visually sumptuous book, with 216 pages filled with large pictures of each game and their record breaking players. Though you can trawl the web to find out record-breaking facts these days, there’s a real hardcore depth in the range of games covered and the details explored in here. Plus, it’s all nicely put together in one place, and totally verified by Guinness for authenticity.

There’s enough in the Guinness World Records 2010: Gamer’s Edition for a hearty old read, but also for a quick breather between marathon gaming sessions. It’s a must-have for gaming aficionados.