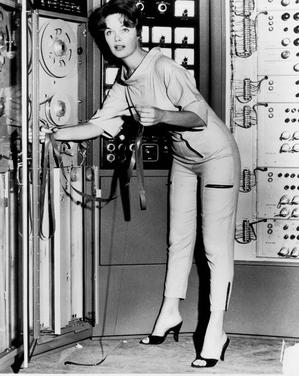 Once it seemed that only fellas would bamboozle you with talk of their hard drives, processors, operating systems and number of mega-pixels. But now it seems that women are just as comfortable with tech-talk.

According to a survey commissioned by electric retailer Comet, the gap between the sexes – at least as far as tech is concerned has closed with 48 per cent of women now feeling more comfortable with technology compared with 47 per cent of men.

Indeed only 15 per cent would now describe themselves as the tech-head of the household with 13 per cent even admitting to turning to their partner for advice on setting up and operating new technology.

Furthermore, women are feeling increasingly confident with technology and would happily set up their laptop or freeview box. Only four percent are daunted by installing their own HDTV and seven percent a surround sound system.

When asked what changes technology has made to their lives, half of women claim they now rely on the latest gadgets to make their lives tick (compared to 56% of men).
However, whilst embracing all things technical, multi-tasking females are not completely abandoning more traditional products.

Nearly two thirds (64 per cent) of women said they’d created a real photo album despite 86 per cent having access to internet photo sharing sites and 46 have a fountain pen even though they own a desktop computer (71 per cent) or laptop (63 per cent).

Says Bill Moir, Head of Marketing at Comet: “This in depth study shows the extent to which both men and women are embracing new technology. It appears that men are no longer the sole IT Director in the home, as women become increasingly tech savvy and reap the benefits of today’s gadgets and gizmos.”