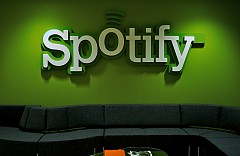 Well the Spotify rumour mill is once again in overdrive with mocoNews, which is owned by The Guardian, now saying that a BlackBerry Spotify app is now imminent. As you probably known the company has already launched iPhone and Android apps and has repeatedly said it will work with other phone platforms too.

mocoNews is suggesting that the app will debut in early 2010 quite possibly at the same e time as the service launches in the US.

It would certainly be a good fit for BlackBerry which is spending a lot of time and money at the moment in broadening its app portfolio. It recently began offering MP3 download service 7digital and song identification app Shazam.

In other Spotify news, the company recently cut the price of a subscription in the UK and also confirmed its deal with 3 to offer a Spotified version of the HTC Hero handset.

One thought on “Spotify coming to the BlackBerry in early 2010”