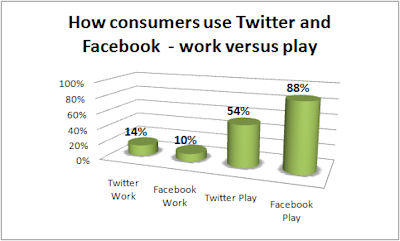 More new research on how people use social networking sites, this time from a company called Opinium for a website called PRmoment.

In among the usual findings are a couple of gems.The best one is that consumers tend to tire more quickly of Twitter than they do Facebook. Apparently over 40% of respondents who said they had tried Twitter only used it once or twice before getting bored. That’s four times the number of people who give up on Facebook. It does suggest that these are people who have heard of Twitter, felt like they needed to give it a go, but have no real idea how to use it.

The other interesting find for me is that only 14% of Twitter users micro blog primarily for work. As brands continue to wake up to potential of micro blogging this figure is surely going to rise. It does however seem quite a low figure.