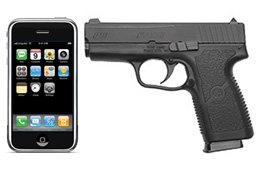 Obviously being British we don’t do guns and prefer to resolve our disputes in the time honoured way of flailing fisticuffs. The same isn’t always true for our people from other cultures who of course love their shooters. However threatening to pulverise gadgets is a new one even for Americans.

For according to Mashable a bloke went into an Apple store and after asking for the iPhone to be fixed then drew out his gun and told staff he was going to shoot the device.

Not surprisingly the guy, Donald Goodrich from Westwood, was arrested and charged with aggravated menacing and scaring the shit out of an Apple employee.

Shooting an iPhone does seem a bit extreme. However can think of a few handsets that would be good for target practice.