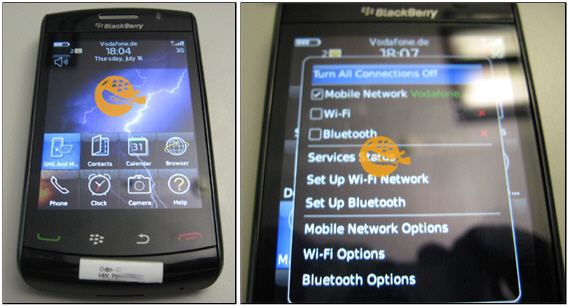 There’s quite a lot of excitement in the UK about the upcoming BlackBerry Storm 2 which should be available on Vodafone in October. The device is a serious revamp of the initial touch screen Storm with some very neat additions.

Engadget got a hands on a while ago and reported that the device is smaller and lighter and has lost that rather annoying SurePress system which clicked every time you touched it.
There has however been no confirmation that the new device would feature Wi-Fi – surely an essential weapon in any smartphone arsenal.

Now a German website has got some crafty pics of the new handset, which have picked up by Crackberry and other sites, that definitely prove it has Wi-Fi on board. NB This is the European Vodafone version, not the US Verizon one.