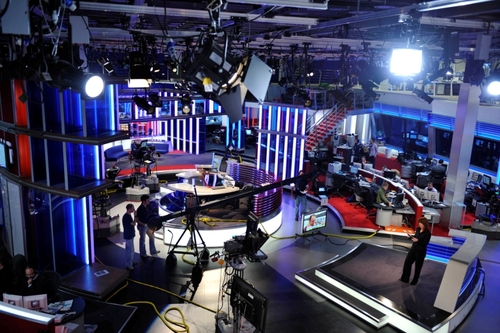 Sky will be launching a HD version of their popular news channel, to be broadcast alongside the current, standard definition, version from Spring 2010.

To coincide with the launch Sky will be updating their studios and production facilities, so expect an even more Starship Enterprise looking set with an ever increasing, and seemingly unneeded, array of computer graphics.

Sky HD currently has over a million subscribers and has been aggressively promoting the service in recent months. They are currently offering the box to new customers for a mere £49, free set-up, plus £50 worth of Tesco’s vouchers. It costs an additional £9.75 a month to subscribe to the HD channels, but it’s still pretty good value. Sky may even drop this additional subscription price in the future, as they did with the Sky+ fee.

The announcement will also put a bit of pressure on Freesat, who currently only offer two HD channels – BBC and ITV. Sky in comparison, has over 30.

In America, the big networks, like Sky’s cousin Fox, already broadcast their news in HD, sort of. Everything in the studio is HD but films taken outside, which could be argued is the news, is not always filmed in HD. Sky is planning to make all of their coverage, wherever possible, HD.

Sounds like exciting stuff, although the thought of Eamonn Holmes in HD at 7.30 in the morning is enough to put me off my Weetabix.

One thought on “Sky News HD from next year”