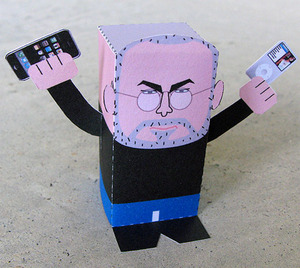 Steve Jobs is set to return from his sick leave on schedule at the end of June – or is he….?

According to the WSJ, senior Apples are trying to coordinate El Jefe’s return with one product launch or another and they’ve not even ruled out a surprise appearance at WWDC on Monday. I feel like I could be adding a world of conspiracy theories here about cloning him over the last six months or bolstering Jobs’s body with Nvidia chips and combo drives, but actually I’m just pleased the chap is well again.

It can’t be easy having the state of your health made so public especially when half the tech world has the knives out for you anyway. The dude deserves a break. Maybe I’ll send him some flowers. Anyway.

In product news/rumour, even the FT is reporting that we’ll be looking at low cost iPhones as early as Monday with anything as low as $99 expected for the bottom end handset. The Carphone Warehouse has apparently got four placeholders on their websites for iPhones and AT&T is showing one of them is named “iPhone Video”. Whether that’s a working title or not is another thing, and there’s still a chance that these placeholders represent colours rather than models.

The one thing I can tell you for sure is that the action is hotting up. I’d stay glued to your screens on Monday afternoon if I were you.