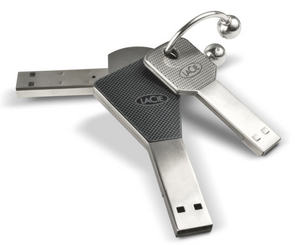 These are keys. Except they’re not keys; except they are. And yet not.

What I can tell you with 100% certainty is that they’re made by LaCie. Well, sort of. They’re manufactured by them but designed by the award winning 5.5 Designers. That’s close enough for me.

What you’re looking at is three items shaped like keys. Now, of course they’re not keys, they’re USB sticks but LaCie calls USB sticks USB keys, so, apparently they are keys. But then, I’ve never called a USB stick a key, so, as far as I’m concerned, they’re not really keys. That’s what all that stuff at the beginning was about. Clear as mud? Good, I’ll press on.

The itsaKey and iamaKey will store either 4GB or 8GB of data, depending upon how much you want to pay, but, until the LaCie shop website has been updated, I can only tell you that their difference appears to be form factor.

The PassKey is a microSD or SDHC converter and so has whatever capacity your littlest of cards can muster, so 16GB now but 32GB shortly.

The keys are made of some kind of unspecified metal that, fingers crossed, will tread that delicate balance between being chunky enough to feel luxuriant but not so heavy that they tear through your trousers.

You can pick them up from £9 as soon as the LaCie shop gets its act together.