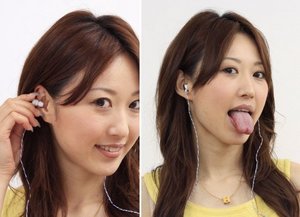 Stick your finger in your ear. Now smile, or wink, or wrinkle your nose. Can you feel the inside of your ear move? That’s the idea behind a Japanese invention called the “Mimi Switch”.

The device looks like a pair of earbuds but instead of containing speakers, they contain tiny infrared sensors that measure the movements inside your ears that are generated by different facial expressions. Inventor Kazuhiro Taniguchi says:

“You will be able to turn on room lights or swing your washing machine into action with a quick twitch of your mouth. An iPod can start or stop music when the wearer sticks his tongue out, like in the famous Einstein picture. If he opens his eyes wide, the machine skips to the next tune. A wink with the right eye makes it go back.”

It could also monitor your mood – Taniguchi also suggests that someone who ‘isn’t smiling enough’ could be forced to listen to only happy music until they cheer the fuck up. Call me moody, but I can’t think of anything worse. There’s also health applications – one mounted on a hearing aid would be able to monitor a person’s breathing or how much they sneeze.

The device will apparently be available within “two to three years”. But that’s in Japan, which has technology that’s practically indistinguishable from magic. Expect it over here sometime next century then.