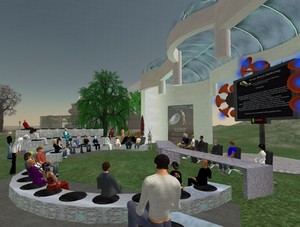 Worlds.com CEO Thom Kidrin seems like a rather opportunistic chap. He has a patent on a “scalable virtual world client-server chat system” and a “system and method for enabling users to interact in a virtual space” that he claims any massively-multiplayer game is infringing.

His first target has been NCSoft, a Koreak publisher that’s responsible for the fantastic-but-aging City of Heroes, and the no-subscription-fee Guild Wars. If that litigation is successful, then Thom says he “absolutely” intends to follow up with lawsuits against Activision-Blizzard and Linden Lab, who run World of Warcraft and Second Life respectively.

Thom says he doesn’t want anyone to go out of business, he just wants to be paid for his intellectual property. It’s going to be difficult for him to prove this one, though, given that these patents were filed in 1996 and 2000, and that most virtual worlds can trace their roots back much further than that, to MUDs, MUCKs, MOOs and MUSHes that date from the 80s.

We’ll keep an eye on this story and report back any developments, because victory in court for Kidrin could see the fledgling virtual worlds industry being cut down in its infancy.