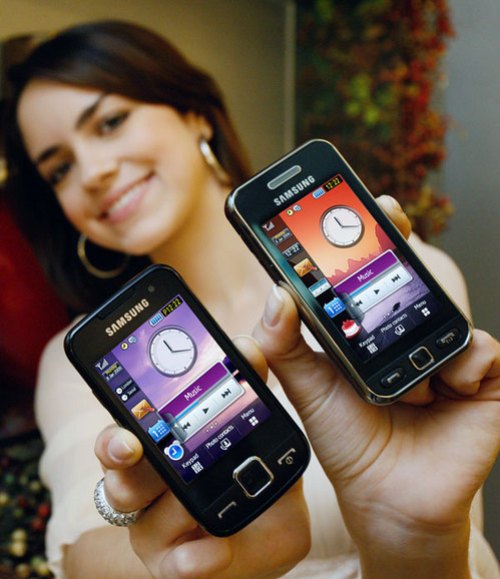 Well, looky what we’ve got here. I almost had a heart attack for a minute when I thought these were a couple of Android handsets from Samsung, especially after yesterday’s comments. No, instead the S5600 and S5230 run on the very acceptable TouchWiz UI and sport a 2.8″ QVGA and 3″ WQVGA touchscreen respectively, both with haptic feedback.

There’s not a hell of a lot of difference between the two. They’re fully accelerometered internet browsers with 3-megapixel cameras and Shazam functionality built in. There’s no named glassware on the optics but I presume they’ve borrowed some tech from the Samsung compact cameras while they were busy getting the phones fitted with the likes of smile shot, blink detection and all the usual photographic features

At the risk of giving it an eating disorder, the S5600 is slightly fatter at 12.9mm thick but for the extra flab is gifted HSDPA, Bluetooth 2.1, an FM radio and the support of all kinds of codecs from H.263 to MPEG4 and WMV as well.

The S5230 is just 11.5mm but takes video at 15fps, so don’t ask me why they’ve given it less onboard memory at 50MB rather than the 80MB its fat sibling carries in its jelly rolls. Actually, do ask me. It’s because internal memory is totally irrelevant these days when you can get 32GB microSD cards.

Both phones will be out sooner than you think – the S5600 in May and the S5230 in April – but no prices as yet. In the mean time you could always pick up an LG Renoir. There doesn’t seem to be a lot of difference.