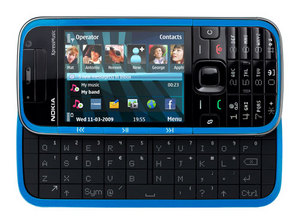 The handsets range from budget to high-end. Starting at the bottom, the 5030 XpressRadio is a candybar with a built-in FM radio antenna, not the internet radio that Nokia’s been pushing to date. It’s very cheap, at just €40 before contracts come into play. Budget-tastic. It’ll be available in Q2.

Then there’s the 5330 XpressMusic, which has a different design to many Nokia handsets. More square. It’s a slider, and it has a 3.5mm headphone jack, 24 hours of listening time battery life, 3G and some sort of crazy light thing going on. If you have any idea what that’s about, then free free to comment. Unfortunately, the 5330 won’t be running S60 – just the cut-down S40 version. It’ll cost €184 before taxes or contracts get involved. It’ll be available in Q3 2009.

Then, at the top of the range is the 5730 XpressMusic which comes in black/red, black/grey, grey/blue and black/pink. It’s got both a numeric keypad and a slide-out QWERTY, which shrinks the screen down a little, but it’s the only phone of the three to be running S60.

Specs-wise, the 5730 has got Wi-Fi, a 3.5mm headphone jack, a 3.2-megapixel camera, HSDPA, and GPS. You can also access your media from the home screen, which will be handy for those who want easier access to their content on the go. It’ll cost €280, and will be available in Q3 2009.

The phones were announced with a webchat this morning, and as part of that chat, the Nokia team also answered a few random questions from the audience. Here’s a few interesting tidbits that they came out with.

Firstly, when asked about the N97, Product Manager for Music Solutions, Steven Stewart, said the handset is “like sex in your hand”(!). The device hasn’t been announced as a Comes with Music device, but Stewart said it would be “perfect for getting unlimited free music downloads”, which sounds like a hint to me.

The inevitable question about Spotify was asked – Nokia responded: “Yes, the music team is aware of most all types of music services and devices. Spotify is one of many interesting new services. Social Music is an important part of the music experience which our teams are busy as beavers working on!”. Given Spotify’s now-officially-announced mobile ambitions, a tie-in could be very powerful.

Discussing Apple and competition, Stewart said: “Nokia is doing many exciting things with music that apple is not. Nokia has a large range of devices for most every taste, style, and use. Nokia also has a subscription model for unlimited free music that users keep even AFTER the membership ends. But we do look at ALL of the competitive intelligence to make sure we are developing music experiences that consumers want.”.

Lastly, with regards to Comes with Music, the service will shortly be announced in Italy, Sweden, and Mexico. There are no current plans to unbundle the service from handsets, so that it’ll be usable with any device. I suspect that’s because, like Apple, Nokia wants to carefully control the ecosystem and not have to deal with supporting other manufacturer’s handsets.

Well, at least they’re pushing it, I suppose.