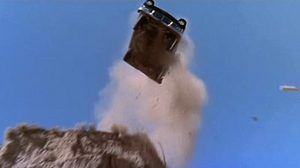 Are you one of those lunatics that spends more time watching the virtual reality of your sat nav’s screen than actually looking at the road? You’re in company. Robert Jones followed instructions from his Sat Nav until half his car was dangling off a cliff.

He only stopped because a wire fence preventing him from getting any further – completely ignoring the fact he was driving down a dirt track three metres wide. The police have charged him with driving without due care and attention, and he describes the incident as a ‘nightmare’.