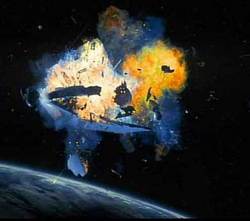 In the first reported orbital collision ever, a US and a Russian communications satellite have accidentally collided 780km above Siberia. A “massive cloud of debris” has been produced, and NASA is tracking the hundreds of bits resulting from the crash, in the hope that they won’t interfere with the ISS and the shuttle, which is due to launch later this month.

It’s comprehensively answered the question of “how much stuff can we stick up there without it hitting each other?”, as 6,000 satellites have been sent into orbit since the first in 1957. Only about half are still in use, with the others having become defunct over the years.

The satellites in question belong to Communications firm Iridium, based in Bethesda, Maryland, and Russia’s civilian space agency, Roscosmos. The former was launched in 1997 and only weighed 560kg, so probably came off rather worse in the collision than its one-tonne Russian rival from 1993.

Place your bets in the comments below as to when the second collision will occur. The closest wins a bit of charred satellite, dug out of the tundra of Siberia.