Compact camera releases have been two a penny over the last few weeks and having survived volleys glassware and patented tech from Nikon, Canon, Sony, Olympus and Samsung already, I thought we’d just about heard the end of it. But no. It seems Samsung held a little something back in reserve and by Jove are they worth waiting for!

The first, as pictured in somewhat unconventional vertical style just here, is the fairly low spec Samsung PL-10. It has a perfectly good enough 9-megapixel sensor, no zoom to talk of but it does work to an ISO light sensitivity of 3200 which is good for something priced at £179.

It has 11 auto scene modes; face, blink and smile recognition; and beauty and self portrait shot too – plus the increasingly popular frame guide which means you can line up the shot you want other people to take for you before you let them mess it up.

The gimmick with which they’re trying to sell this one though is by calling it a PMP as well. What that seems to mean is that it’s got a 2.7-inch LCD and plays MP3s. Still not convinced.

What has rather rolled my socks down, if not knocked them off completely, are the two new additions just over here though… 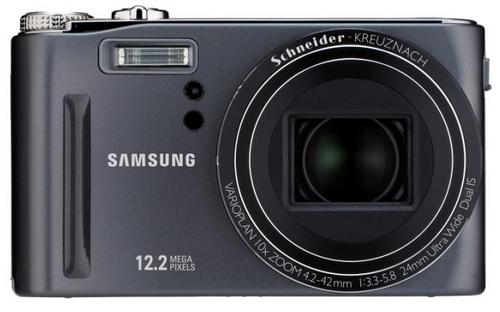 Essentially, the WB100 and WB550 are pretty similar creatures. Both have 12-megapixel shooters but the WB100 only has a 5x zoom whereas its sibling boasts a really good 10x mode. But, don’t be fooled into thinking that that makes the WB100 less expensive.

Both cameras have excellent super wide angle lenses at 24mm, rather than the standard wide 28mms we’ve seen from all the other manufacturers, but the Samsung WB100 uses a 3-inch VGA AMOLED screen, instead of a TFT-LCD, making the picture quality far better but also the battery life last longer. 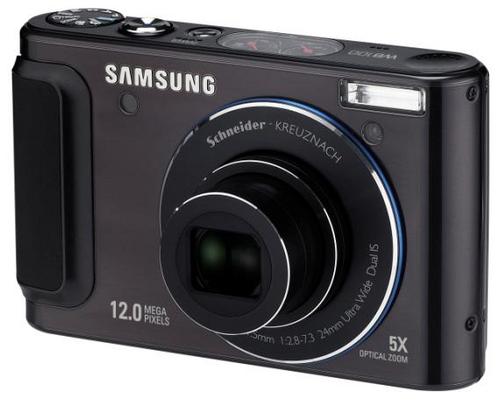 Both cameras feature all the same shooting modes as the PL10 but with the added bonus of HD video capture at 720p. Perhaps best of all though, these cameras are fully manual if you want them to be, making them the cheapest and best on paper so far this year. This doesn’t mean they’ll take the best shots but I’ll let you know about that as soon as I’ve had my hands on them.

The PL10 comes in silver, royal black, arty red, candy pink and silly purple. One of these colours is not real.