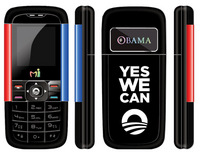 Kenyan mobile supplier Mi-Fone is the latest company to have a go at cashing in on Brand Obama, launching this curious Barack Obama themed mobile phone in the region.

The Mi-Obama phone will help Mi-Fone “forge new frontiers in African urban youth market,” apparently, although unlike the man whose slogan the phone carries, the low-spec handset is unlikely to change the world for the better and have people sobbing with joy.

It’s a generic dual-band GSM piece, and you know there’s nothing to get excited about when one of the bullet points on the list of features is “calculator”. It does at least have a built-in little LED torch. That’s a handy addition, so much better than trying to find whatever it is you’ve just dropped by using the light of the screen.