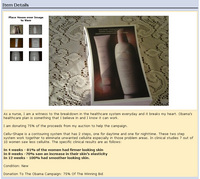 Your old Nokia 3310 could help Barack Obama become president of the United States of America. We bet you never thought that would happen when taking out the contract in 2001, did you?

That’s the idea behind the alarmingly short-sighted ObamaAuctions.com, a site where users can sell their stuff and pledge a proportion of the funds to the Obama campaign. You could, if you want, buy this anti-cellulite cream – and relax in the knowledge that 75% of the cash raised will go to support Barack’s bid to move into a very nice house in Washington for at least the next four years.

It’s not really much different from selling something on eBay and pledging a proportion of the funds to the Obama campaign, to be fair, although Keith Daniels, creator of ObamaAuctions and operator of MyEventPR said, amazingly, “We’ve come to rely on sites like eBay to buy and sell things, but no one had merged that idea with their support of a candidate before. Once I had the idea, I had to do it.”

He HAD TO! If you’re still not swayed, Keith has created a little YouTube video that tells everyone why his idea is such a great idea and not at all as bonkers as it sounds. We like to think Keith’s video will “go viral.”