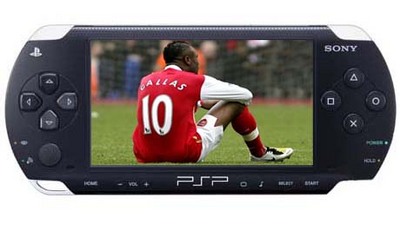 Fans in the Emirates Stadium could soon able to watch a live stream of football games played at Arsenal on their PSPs should they wish to do so.

The plan is to provide replays and statistics of events on the pitch within 18 months via a system that has already been tested.

“This device will brings an extra dimension to the game with information and statistics. We think that the next generation of the software that runs it could actually link fans during the game with each other.”

Or on the other hand, supports could just try talking as well.

As a regular football match attendee, I think this is one of the worst ideas I’ve ever heard in my life. How about just watching the game first hand? Isn’t that why people go? And as for replays and such, that’s what the Jumbotrons (big screens at either end of the stadium) are there for.

So, the only thing this scheme is going to add is the statistics and that’s what you watch Match of the Day for. Who wants to be looking at the passing accuracy and possession on your handheld when you could be missing a goal; you know, in real life, on the pitch, the thing you paid £50 and dragged your arse out in the cold to see?

On top of this, why on Earth do I want to take a PSP into a crowd of 60,000 people where it will either be stolen or fall onto the floor and get trampled during goal celebrations. Having said that, I understand the atmosphere’s not exactly electric at the Emirates, so the likelihood of that is pretty slim.

I’m not going to bang on about the gentrification of football here and money ruining the game. There’ve actually been plenty of positive changes. This, though, will not be one of them.