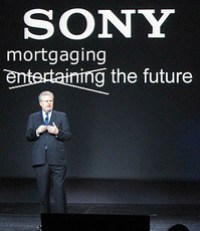 Sir Howard Stringer, the Sony boss whose company reforms were doing a great job until the global financial crisis stopped everyone buying second BRAVIAS for the bedroom on their credit cards, will be turning down his bonus this year as Sony reveals its first annual loss in 14 years.

“The massive economic upheaval being experienced across the globe is sparing no one in the consumer electronics world,” Stringer said, as he revealed a forecast loss of $1.7bn for the year – and said Sony would look to making more job cuts on top of the already-announced 16,000 staff its planning to axe – eventually saving 30% in personnel costs.

Sony also reduced its forecast for total sales revenues from 9 trillion (9,000,000,000,000) yen to a still-unbelievably-huge 7.7 trillion yen – a 17% drop. Just imagine how much more Sony would be in the red by if it didn’t massively over-charge for its products.

Related posts: WALKMAN brand to save the day! | “PlayStation phone” not saving any days