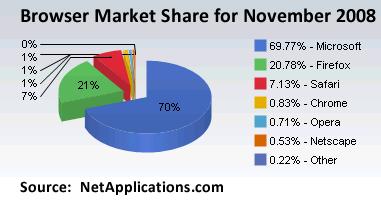 It’s no secret that internet browser Firefox has been one of the shining lights of the open source movement, taking market share from Microsoft in a way that Linux hasn’t ever quite been able to. Well, in November last year, usage of Internet Explorer dipped below 70% for the first time in a decade, and Firefox’s market share rose above 20%.

At its peak in 2003, Internet Explorer was running on nearly 94.5% of the world’s internet-using computers. Since then, however, usage has steadily declined, due to endless bugs and security vulnerabilities leading to poor public perception of the software.

Other browsers like Firefox and Opera have pioneered innovations, including 3rd-party extensions, a more streamlined interface and better security measures. These have been a hit with customers, and the high-profile launch of Firefox 3 helped the browser build market share after hitting the headlines for breaking download volume records.

The latest contender, Google’s Chrome browser, recently exited beta. It sacrifices some of those features for blistering speed, but is my current browser of choice by far. In fact, Google has recently begun advertising Chrome’s speed in its popular GMail webmail app, promising ‘faster GMail – click here’.

Meanwhile, IE8 is on the horizon, which should bring considerable improvements. It’s safer, more user-friendly, more feature-packed and just generally snazzier. I suspect Microsoft might need to launch a bit of a PR offensive to get people to try the damn thing, though. 2009 will certainly be an interesting year for browsers.