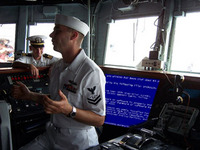 The UK’s warship fleet is getting itself an update, with versions of worst-windows-ever Windows 2000 and best-windows-ever XP rolling out across the fleet.

First to replace its ageing custom software with the “new” Windows operating systems is the HMS Montrose, which will soon enter a refitting phase where its old kit will be replaced by standard PCs.

The Type 23 frigates, which make up the bulk of our seafaring death machines, are expected to gradually switch over to Windows machines as and when they’re due for a servicing, and, as ever, it’s all about reducing costs. Navy man Commodore Graham Peach said the Windows-based warships “will enable us to provide more efficient support to the fleet, simplify operator training and deliver cost savings in the long term as servicing is required.”

Which means that instead of calling out a massively expensive contractor every time one of its battleships breaks down, the captain will be able to get in his mate who’s a bit handy with PCs to fix it up for £50 and a free cruise to Cyprus.