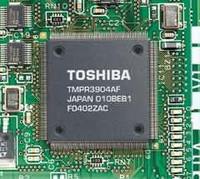 They may have underwhelmed, in name only, with the new Regza range but it’s good to see that Toshiba has a concept to show us at CES 2009. Toshiba Cell TV is the stuff of which the future is made and that future is a screen resolution twice as good as anything available at the moment.

True to Tosh’s current upscaling ethos, that’s exactly what the 56″ protoype does – only this one upscales Blu-ray standard 1080p to what they call a 4K x 2K although technically it’s 3,840 x 2,160 pixel display.

The Cell TV system is a special set top box added to a Regza LCD screen. The box can record up to six HD channels simulatneously which blows my BT Vision effort not only out of the water but well clear of the Earth’s atmosphere altogether.

The technology at the heart of the system is the cell microprocessor – the same already used, ironically, in the Sony PS3. Apparently, the chip was developed with both Sony and IBM. The Cell TV will be demod at the Toshiba stand at CES. I’ll grab the video camera and get some footage of it as soon as the floor opens.