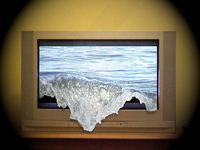 Sky has tried, tested and succeeded in developing a 3D HDTV system for the consumer home. They’re able to use the existing service infrastructure but unlike the Philip’s concept 3D screen, it does require viewers to use polarized glasses.

The satellite broadcasters used the system on episodes of Gladiators which were recorded with sets of camera pairs used to shoot the visuals for the right and left eyes between them. So far, there are no official plans to bring the service to the mass market but with Hollywood shooting more and more big budget features in 3D, it’s obviously a serious option.

One difficulty is that, at the moment, the TVs required to experience the effect would cost a fairly prohibitive £2,000 and another, for my money, would be the concern that perhaps it’s just not worth it. Are transmissions in 3D really that much better?

I was totally blown away with 3D when it first broke from the chains of the red/green glasses. It does look fantastic, but the effect is a bit of a novelty and, for me, it’s already wearing thin. I don’t think any filmmakers have used it to any powerful dramatic effect or in a way that has helped to tell a story. Sky themselves have also found that less high impact, more subtle uses of their 3D recordings have been more successful. Perhaps it’s just not worthwhile.