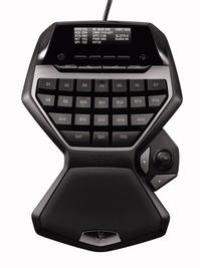 I really want to try this. It’s a “Gameboard” (i.e. mini-keyboard for gamers) that’s designed to complement an existing keyboard and mouse setup, rather than replace it, like other gaming keyboards.

It’s got 25 programmable keys, as well as a programmable analogue stick and three different ‘game modes’. Logitech claims this gives you “87 ways to control their game”, though that seems like they’ve just picked a random figure out of the air. 25 x 3, plus 1, then bump it up a bit more to make it sound good?

Features-wise, it’s got backlit keys, it’s got onboard memory, so you can store your configs and port them to other PCs, it’s got a 160 x 42 LCD panel, for displaying stats and other random info, and it comes pre-configured for WoW, CoD4, and “many other popular games”. It costs £75 and appears to be available now.

In the past I’ve dismissed stuff like this as novelty, but I do genuinely want to try this, because it looks that bit more useful than stuff like the “Cyber Snipa”.

Also, speaking of the Cyber Snipa, why do companies think that gamers like horribly garish bits of plastic like that? Logitech have wisely made this look a bit more serious. It actually fits in next to my keyboard, without looking ridiculous. You might not believe it, but even us hardcore gamers have some taste.