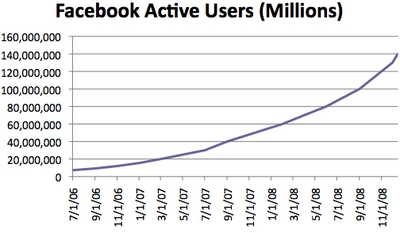 The social networking behemoth rumbles on. As of yesterday, Facebook has over 140 million active users. The site is growing at a rate of 600,000 users a day. That’s a whole lot of poking.

Extrapolating the trend, you find that by March the company could hit 200 million active users. Interestingly, 70% of the growth is coming from outside the States, meaning that the market in the USA (and likely the UK, too) has possibly matured and is no longer growing as fast.

Even more facts and stats can be found on Facebook’s press site.